Diamond off to Polgar Girl’s 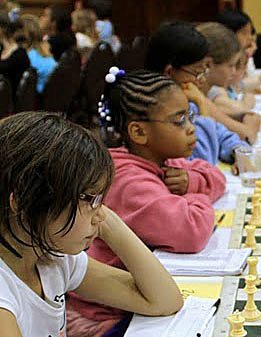 Diamond Shakoor will be heading to Lubbock, Texas to compete in the 8th Annual Susan Polgar Girl’s Invitational to compete for glory and perhaps scholarships. During the Heritage Concert Series, radio personality Warren Stevens ran into Diamond and father, Abdul Shakoor and spoke to the talented 10-year old. The two spoke to Stevens about her progress at the A.K. Shakoor Kings and Queens Chess Academy. Results have followed:

Both Diamond and her father will travel to the tournament to compete against chess players from all over the 50 states. If you would like to contribute to Diamond’s success send all donation and inquiries to the contact below.

9 Responses to “Diamond off to Polgar Girl’s”