Both Vanita Young and Dyhemia Young (unrelated) have traveled the beaten path of life. Both have had tremendous challenges to face and both were raised outside of the traditional family setting. The two got to the Polgar tournament on different paths but finally crossed in Lubbock, Texas. 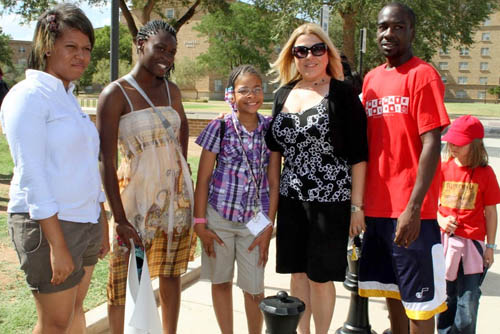 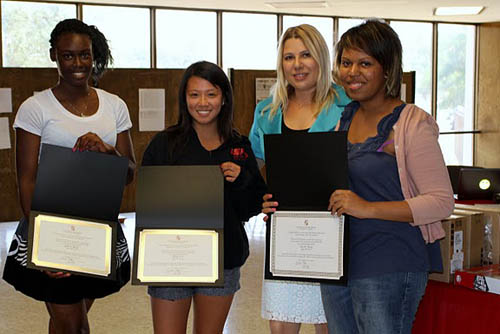 Susan Polgar with scholarship winners, Dyhemia Young, Cheryl Liu and Vanita Young. Sneha Chikkala also received the honor, but is not pictured. These scholarships are awarded to out-of-state high school upperclassman and were not based on tournament performance (report, standings). Photo by FM Paul Truong.

Perhaps the most serendipitous fortune they received is that people came to help them in a time of need. Who really knew they would be awarded the scholarships? Both traveled tortuous paths, yet triumphant outcomes. Both also had similar expressions of gratitude.

Vanita, who got 4/6 knew this would be a good experience for her, but had no high expectations. It was not her first tournament, but perhaps a culmination of her total chess successes. Chess has provided her with more options that she may have had otherwise. There is no way she could have envisioned that chess would play such a pivotal role in her life.

Overcome with tears, Vanita remarked, “Thank you. You’ve truly turned my life around. This is a learning experience for me. Chess gets you far in life, and you’ve helped give me a scholarship so I don’t have to worry anymore. Just thank you.”

Dyhemia, playing in her very first tournament, won only one game, but what a big win it was for her! After she won her third game, she was overcome with emotion as if the sole victory represented triumph over all of her life’s hardships.

Dyhemia told local affiliate FOX 34, “I thank them and I’m appreciative of them for even believing in me and not giving up. I know it was hard for them to find me and they could have picked someone else to come here but they didn’t stop. So thank you.”

It is with great hope that the two girls will be able to study hard enough so they can meet the rigorous requirements of Texas Tech University. It will be the latest and greatest challenge they will face. There are many girls around the world who would sacrifice everything to obtain education in the U.S.