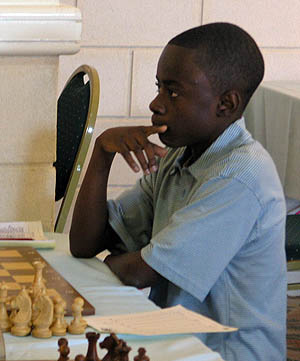 Guy Colas told The Chess Drum that there was an intense focus that his son Josh Colas had before the National K-12 Championships in Orlando, Florida. “As you know Josh never reveals his emotion which is why he is liked so much. However, I can tell when he’s pumped.” The proud father mentioned before the World Youth in Greece that Josh had been preparing intensely to improve his level of play.

Josh made his international debut in Trinidad and followed this success with a respectable showing at the World Youth Championships. Josh has gotten proper guidance and has been working with his trainer. The result… a national championship and a stone’s throw away from breaking the 2200 barrier, the rank of National Master.

“I can tell when he’s pumped.”
~ Guy Colas on son Josh

Currently at 2193, 12-year old Josh is also threatening the new record of his friend Justus Williams, who recently broke the age record for youngest African-American to reach National Master. Both Colas (6.5/7) and Williams (6/7) are scholastic All-Americans and dominated the 7th grade section placing 1st and 2nd. Colas’ only draw was with another New York standout Issac Barayev, who tied for third with 5.5/7.

Josh loving family (mother Yanick and siblings Korey and Chellsie) were pleased with the news of his biggest accomplishment and many of his friends will be glad to see the success of such a deserving and humble player. Congratulations!!