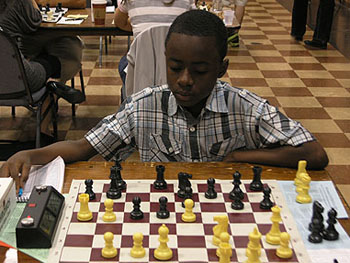 Joshua Colas has visions to shatter a few records in American chess. The 11-year old plays chess with a passion that few have. Joshua has been playing against stronger competition in what will lead him to his first international tournament in Port of Spain, Trinidad in August.

The real goal for the scholastic chess All-American is to compete in the World Youth Championship in October to be held in Greece. His father Guy Colas is beginning to rally support for his son so he can compete on one of the largest stages for youth chess. In the meantime, he will test his skills against Masters from the Caribbean and Latin America at the Caribbean Chess Festival.

A Lower Hudson newspaper captured this interesting story of Josh and his various pursuits.

Note: I have just learned that a non-profit foundation has been set up for Josh by the White Plains School District. According to his father, they would like to hire a world-class coach. Tax-deductible contributions can be made payable to the non-profit “Foundation for Public Education in White Plains, Inc.” with a note in the memo line to “Joshua Colas – Chess”.

Checks can be sent to: