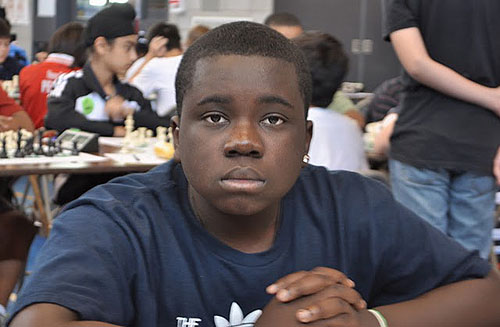 After making strides in the past year to make National Master, Justus Williams has accomplished this feat smashing the age record for African-American master for almost three years! The 12-year old Bronx native has had a spectacular year winning the National K6 Championship and traveling to Brazil and Canada to get some experience. The I.S. 318 student is a product of the New York Chess-in-Schools program and has already served as one of its prized students. Next month, he will be traveling to Greece as part of the official U.S. delegation for the World Youth Chess Championships.

Recently Justus attended the U.S. Chess School in Texas for the nation’s best and brightest young chess players and has been a regular at the Marshall Chess Club. On the 21st of September at the Chess Center of New York, Justus gained 18 points and ended the tournament with a 2200 USCF rating. This score was posted on the 23rd and qualifies him for the National Master title. Thus, he breaks the age record for the youngest African-American to have earned that title. The previous record-holder was Kassa Korley who broke Howard Daniels’ 20-year old record at 15 years, 2 months last year.

Born on May 25th, 1998, Justus has shaved almost three years from the mark earning the title at 12 years, 3 months and 28 days. In these days records have fallen more regularly. The age record for U.S. National Master overall is held by Nicholas Nip at 9 years. The youngest record for International Grandmaster is 12 years 7 months by Sergey Karjakin from the Ukraine (now representing Russia). Justus will receive his official certificate in the mail and his unofficial title as the youngest Black master ever!