Preview: Looking at the quarterfinals, you have Koneru Humpy and Hou Yifan in the same bracket. That is unfortunate and probably an oversight. Apparentely, Alexandra Kosteniuk is the top seed as World Champion, but it still would not explain Humpy and Hou in the same bracket since they would be #2 and #3. It appears as if Kosteniuk was given the best chance to defend.

This could be an “all-Chinese” semi-final, or it could be India vs. China semi-final. Ruan Lufei is in good form and her matchup with Dronavali Harika will be a major fight. Ju Wenjun can possibly be a difficult opponent for Koneru Humpy. Uncertain of their head-to-head record, but Ju is a very determined fighter as are all of the Chinese.

Almira Skripchenko will be a heavy underdog versus Zhao Xue, but her games against Viktorija Cmilyte were impressive. Hou-Lahno will be a good matchup of experienced players… both legitimate Grandmasters. There is no rest day until after round #5. 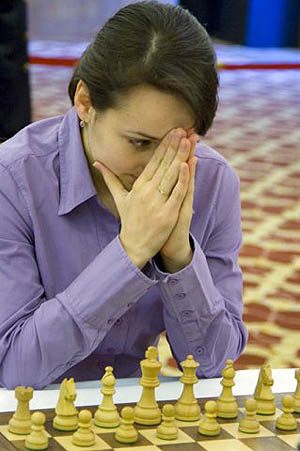 Women’s Blitz Champion Kateryna Lahno
will try to take the match to blitz tiebreaks after loss.
Photo by wwcxc2010.tsf.org.tr.