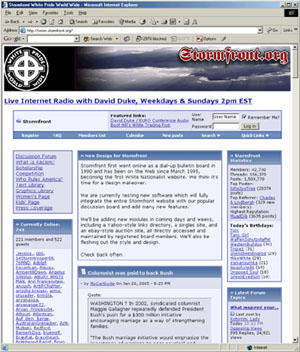 Part of my efforts in gathering information for The Chess Drum entails browsing the expanse of the Internet using search tools. Typically, I punch in words, combinations of words and full phrases to sift through the billions of pages and often cross some very interesting information.

I often Google “www.thechessdrum.net” (and other combinations) to see what sites are referring to The Chess Drum or using its content (legally or illegally). One day, I came across a search hit which led to “stormfront.org,” a white supremacist website with 15,000 members scattered around the world. They were discussing Black people in Scandinavia. On January 5th, 2004, one person wrote…

“As an avid chess player, I was dismayed to see a black man representing Sweden in a major chess tournament as of late.”

The person then supplied a link from The Chess Drum which featured a story on Pontus Carlsson. They continued talking about the “mud flow” into Scandinavia and questioning how and when Blacks arrived in that region (full thread here).

On Black Skiers and Chessplayers

Recently, I came across another search hit from the same website and this thread started out talking about skiing. A poster was dismayed to see TV coverage of Ghanaian Kwame Nkrumah-Acheampong, a top skier who was born in Glasgow, Scotland. It was posted on January 2nd, 2005 and went as such…

“I sat down this morning watching Skiing on Channel 4 (I have now given up on Match of the Day), with my cup of tea and few biscuits. Finlay Mickel did Scotland/Britain proud, and now finishing in the top 20 in many races, BUT wait for it, later in the programme they had a BLACK skier, yes BLACK..! Have a guess what’s next..?

Check this story out.. His name is Kwame Nkrumah-Acheampong, his family is from Ghana, though he was born in Glasgow. He returned to Africa when he was one and moved to England three years ago, taking a job as a receptionist at the indoor slope in Milton Keynes. He has the backing from Britain, not sure who is paying for his equipment etc or what flag is flying under but you can rest assure the Labour Party won’t be far behind. I have read he got £100,000 but not sure..?

Is there no end to this crap, I can’t even watch one programme where there is no racial propagande from Labour. Not only that you can imagine what happened to my tea and biscuits when I first saw this on my screen.”

“That has got to be the height of Political Correct lunacy – a black skier! 😀 :rofl I have never heard of anything so ridiculous in all my life. What are the loons at the tv stations going to inflict on us next – an atempt to make us believe that a blackman can be a grand master at Chess, perhaps? :rolleyes: :rofl”

Scrolling down, another poster added…

“That comment made me curious, so I had quick look on google:
https://www.thechessdrum.net/newsbriefs/2004/NB_Ashley6.html“

Finally, the initiator of this whole dialogue ended the discussion by inserting the picture of Maurice Ashley in his post and saying…

I sent the links to Maurice Ashley (who recently shared an incident) and he stated, “Incredible! These people are so backward that it’s hard to believe. Nothing to do but keep pushing on.” I have heard these same racist notions several times. On another note, I remember a story Marvin Dandridge told me about being slighted in Texas when he asked to get into a blitz rotation at a chess club he was visiting. It was only after he crushed everyone that they finally asked him his rating. They were blown away when he replied, “2320.”

The last of these statements was found just yesterday while doing a Google search on the term, “black chess grandmaster.” Again… I came across “stormfront.org.” This one was the most ignorant of them all and was posted September 7th, 2002. Here are excerpts from a Serbian national who uses chess as a symbol for racial propaganda.

“As an example there is no black chess grandmaster on this planet! Not single one! And in my street we have 2 grandmasters, 1 International Master and 4 FIDE masters. What does it mean? Simply, black people can not play chess, or at least they can not play better then whites! That is proven fact! Best black player is some guy from New Jersey, and he is just International Master. One in USA, but he could not play for our local team. He is not good enough.” (be forewarned… ignorance level is about 2550 strength… full thread here)

“Incredible! These people are so backward
that it’s hard to believe.
Nothing to do but keep pushing on.”

Well… the above post had one truth in the sense that Blacks have not made inroads into the upper echelons of chess, of course for a number of different reasons. However, his most egregious error (among many) was the fact Maurice Ashley had already become a Grandmaster almost three years prior to his 2002 post and there were many International Masters before that. Last year in 2004, one person launched a missive at Ashley claiming that he received his title through affirmative action. (see the comments by “AlphaNumericus”)

Chess is often used (wrongly) as a measuring rod for intellectual ability and sometimes is used for racist propaganda. (Note: At the Olympiad in Calvia, Spain, I saw a tournament program with the famous painting of the Moors playing chess except the graphic artist had put European heads on the players.) Of course, raw intelligence has nothing to do with chess ability. If nothing else, the comments above proved that! In fact a recent article in Psychology Today discussed and debunked this popular notion.

One of the main problems, as I have stated many times before, is the lack of chess coverage concerning non-western and non-European nations. It feeds into this notion that only particular types of people (e.g., racially, socially and intellectually) excel at the game. This is a pervasive view and it is nonsense. Nevertheless, the only sure way to debunk this notion is for chess excellence to win the day within the Black Diaspora (as it has in China and India). Although Reverend Jesse Jackson, Sr. has lost much of his strength in American social politics, he once made the following quote… “Excellence is the best deterrent to racism.”

Posted in Media Stories, Politics, The Chess Drum | No Comments