At the 2019 Chicago Open, I walked into a tournament hall and noticed the wide range of ages playing in the under-1000. However, what also stuck out was three girls who were under the watchful eye of their coach. I snapped a few pictures not immediately realizing the backstory of success. Of course, in today’s tournaments it is rare to see three Black girls competing. I knew that Glenn Bady’s daughter Grace Bady was playing, but the pink uniforms intrigued me.

I later saw them in the skittles room with their coach and went over to introduce myself to their coach, Eric Luster. He told me he was familiar with The Chess Drum and immediately introduced me to Imani Hill, Trechelle Williams and his daughter Shakira Luster. Imani had such a bright smile! After the introduction, I realized I had seen a story and video about St. Ethelreda floating around on Facebook from one of the Chicago Chess Blitzers, While I bookmarked it for a story, I now had my own scoop. 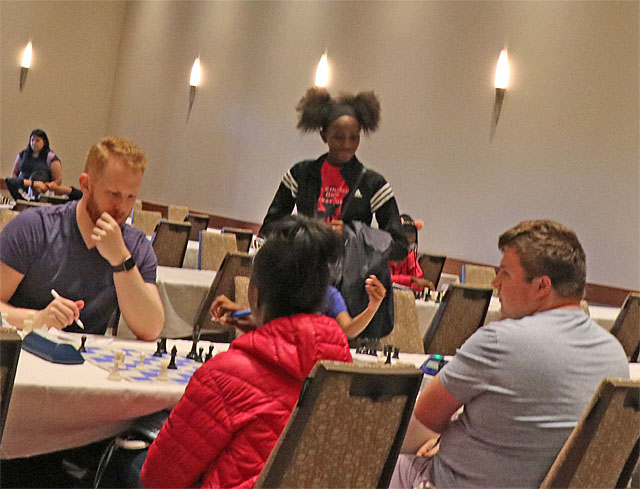 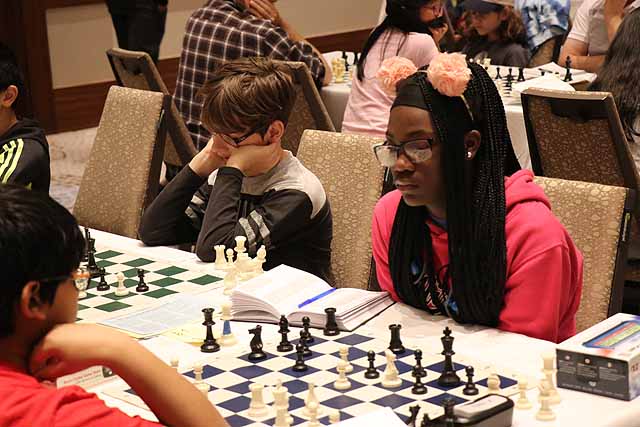 “We are stars,” said Shakira half-jokingly. It was apparent from watching them that she was the outspoken one with very expressive eyes. I soon had an idea to get some photos of them. I had been selling Triple Exclam, the biography of International Master Emory Tate. There were numerous blitz battles going on, but I had another idea. I told the Coach Luster that I would present each of them with a copy of Triple Exclam. I ran to my car to retrieve the copies and we were able to get some nice photos. 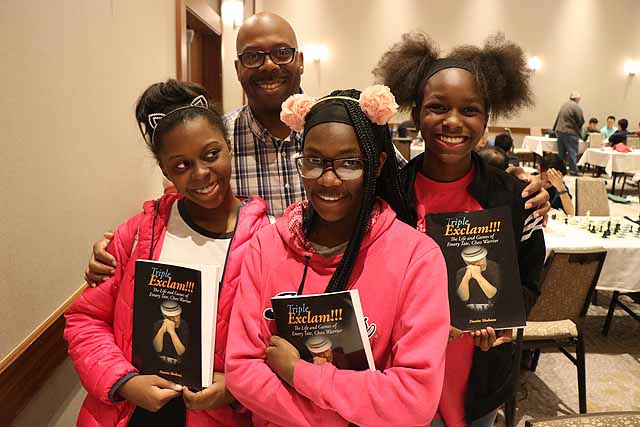 After the photos, I challenged them to a few of the puzzles from Triple Exclam. This was the best part. I wanted to see what their thought process was. The first puzzle was relatively straight forward. In back was the banging of the chess clock. IM Kassa Korley was holding court against the Chicago Chess Blitzers and of course I wanted to watch, but this was a “teachable moment.” 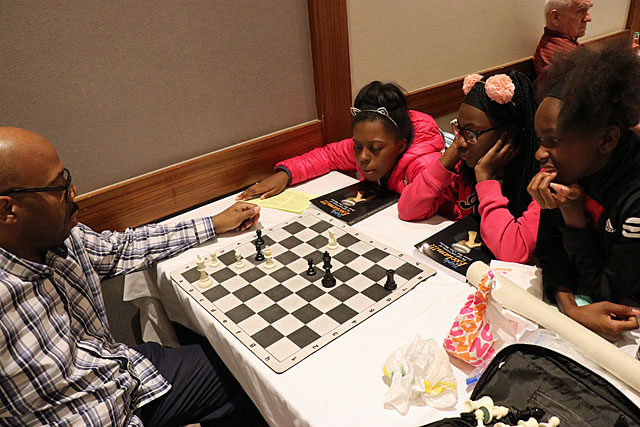 The girls peered at the board with inquisitive eyes. In this instructive puzzle from Tate-Cohen, 1996. The girls saw 1. Bd3+ skewering the rook, but rejected it because of 1…e4. They thought a bit longer, looked at other variations before going back and finally seeing the cute 2.Bxe4+! Kxe4 3.Nf6+ snaring the rook. Photos by Daaim Shabazz/The Chess Drum.

Interestingly enough, the second puzzle (Tate-Serper) I gave them was much harder! This puzzle was presented by GM Gregory Serper shortly after Tate’s death in a tribute on chess.com.

The first move that was suggested was 1.Rxd4 which of course would lead to mate if black plays 1…exd4 after 2.Qe7+. Of course, black would play 1…Ba3, keep the extra rook and play Rh1+ if the white queen wanders. There was also the suggestion 1.Bxf7 with the idea of 1…Kxf7 2.Qb7+ but black can play 1…Qb4+ with unstoppable mate after 2.Bb3 Qa3. After some time, I gave them 1.Qb7! to threaten mate.

After 1…Rh7, they suggested 2.Qe7+ but the black king runs away. Other moves fall to 2…Qa3! So… after minutes melted away, they learned about deflection of 2.Rh1!, but isn’t white getting mated again after 2…Qa3? The beauty of this is one has to see these tactical oddities. Finally Shakira found 3.Qxf7+!! Rxf7 4.Rh8 mate!

The last puzzle I gave them was Emory Tate-Luke Zhao. We spent a long time on that one. The tactical ideas seem to impress them. With prodding from a few bystanders, they learned the solution to this amazing sequence which was played during a simul. Can you figure it out?

We had a great time and I would watch them on the next day not quite sure what impact was made with those tactical puzzles. They finished out the tournament with respectable scores with Imani and Trechelle both scoring 4/7 (under-1000) and Shakira getting 3.5/7 (under-1300). After the tournament, Coach Luster told me they were going through the book and the rest of the puzzles. Let’s hope their experience at the Chicago Open will yield them more success! 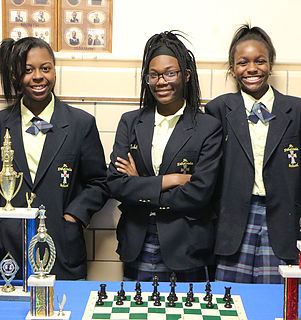