The 2015 Zimbabwe Open is currently taking place in the nation’s capital. The tournament has received the sponsorship of the Kasparov Chess Foundation and aspires to offer chances for the IM norm. The event will be taking place at the New Ambassador Hotel in Harare from 28th December until the 1st January 2016. According to a quote published by the Herald newspaper in Zimbabwe, Zim Chess President
Charles Kuwaza stated, 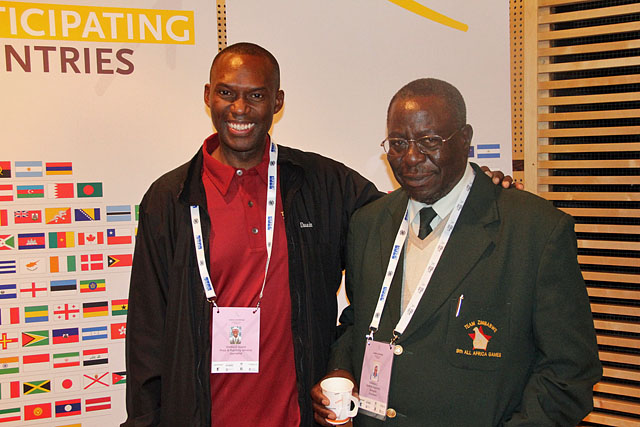 The Chess Drum’s Daaim Shabazz with Charles Kuwaza of Zimbabwe
at 2014 Chess Olympiad in Tromso, Norway.
Photo by Daaim Shabazz.

This tournament required players to have FIDE rating in excess of more than 2000+ and offered a prize pool of US$3500! In addition, there is also an tournament which offers a further US$1500 in prizes! Zambians dominate the list of top seeds and the top Zim players are absent.