Calabar sixth-former National Master Shreyas Smith captured the 2015 National Junior Chess Championship on Sunday, when he defeated his main rival Horace Sinclair in a four game playoff match at the head office of the Jamaica Olympic Association. Smith was the defending champion having won his first junior title last year.

Both players ended the Championship tied on four points after Sinclair, who will be studying at the University of the West Indies (UWI) in September, drew two of his five games and Smith lost one of his five to Sinclair. Despite the loss to Sinclair, the rules of the Championship, require that a tiebreak match take place if there is a tie at the top of the standings after regulation play. 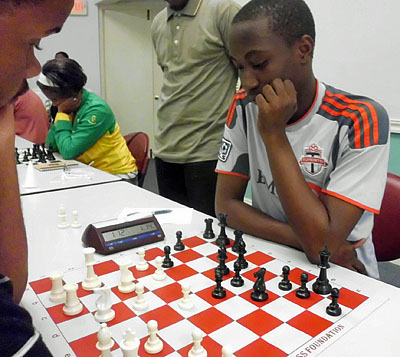 The first two games of the four-game tiebreaker were played on Saturday and both players secured wins to leave the match tied at 1-1 going into Sunday. After the first game on Sunday, the score was still tied as the players drew to leave the match poised at 1.5 – 1.5 going into the last game.

Playing with the black pieces in the last game, Smith overcame the disadvantage of having the second move to register a win and hence secure a 2.5 – 1.5 match victory and his second straight hold on the junior champion title.

Third place went to Nathan Belinfante of Wolmer’s Boys, who ended on 3.5, while fourth was shared by UWI’s Tahj Davis and the 2013 junior champion, St. Jago’s Alistair Walker, each of whom ended on 3 points.

The Championship was sponsored by the Jamaica Chess Federation and the Jamaica Olympic Association.