IM Emory Tate is perhaps the most selfless player around. His willingness to wander by random analysis sessions and suggest a move is uncommon among master-level players. He does it with such flair and expression that he often leaves bystanders gawking at his suggestions. (Note: Yes… it’s happened to me.)

IM Emory Tate conducting a 30-board simul. He won every game.
Photo by Chris Torres.

Tate has traveled from coast-to-coast dazzling his peers and fans with his imaginative play. He has beaten dozens of GM-level players and still has hope to pursue the elusive GM title. These days, Tate is offering his services at a chess teacher. What better way to share his passion… and eloquently so. For the past year, Tate has been on the west coast and has worked in the Bay area, most recently the Fremont area with Chris Torres of Chess Musings.

During the Fremont Chess Camp, Tate was one of the instructors and held a 30-board simultaneous exhibition of some of California’s top juniors. As expected, they tumbled one-by-one. However, one game caught the attention of spectators. It was against Luke Zhao who faced Tate’s Danish Gambit, but did not play the equalizing line after… 1.e4 e5 2.d4 exd4 3.c3 dxc3 4.Bc4 cxb2 5.Bxb2 d5! Instead, he opted for 1.e4 e5 2.d4 exd4 3.c3 d5!?

Black got a playable position, but was slowly pushed back as white’s pieces became mobilized. There is a bad feeling when your opponent gets a lead in development and your king is wide open. However, in the position above, black’s king is guarded by two rooks, a knight and queen! So how does white score a scintillating win? Enjoy! 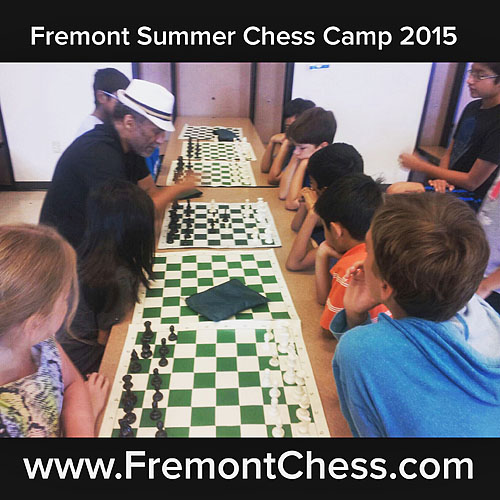