United States Chess Federation (USCF) Executive Director Jean Hoffman has sent out a press release that Fabiano Caruana will change his federation and rejoin and represent the USCF once again. The announcement brings with it a definite joy to those who have watched him mature from a diminuitive, bespeckled boy to an classy and humble top-five player. This transfer has been initiated by Caruana and it will certainly create a ripple in the chess world. If the application goes through, he will be eligible in September.

Here is the statement from Hoffman:

“The addition of Fabiano Caruana to the United States’ roster is historic. For the first time in history the United States will have three of the top ten players in world ” said Jean Hoffman, Executive Director of the USCF, “Over the past several years, we have made tremendous strides to increase the awareness of, and appreciation for, the great game of chess in the United States. The return of Fabiano to the USCF is another large step toward achieving our goals.” (see full statement)

This announcement comes after years of speculation and raging rumors that Caruana was going to play in the U.S. Championship. There were further rumblings and speculation after the 2014 Sinquefield Cup and the question has repeatedly been broached. Caruana released the news to the Twittersphere…

Important news: I've decided to play once again for the United States. For the full press release, click here: https://t.co/oyd7WPEEK6

“I’m absolutely thrilled to be representing the United States again and working with the Chess Club and Scholastic Center of Saint Louis. I’d like to thank everybody who has made this possible, and I look forward to this exciting new partnership,” said Fabiano Caruana.”In addition, I want to take this opportunity to express my appreciation and gratitude for the support given to me over the past ten years by the Italian Chess Federation. I wish them all the best for the future.”

For a long time there has been confusion about Caruana’s background and upbringing. A large number of chess players assumed that Caruana had been in Italy since he was born, but he was indeed born in Miami, Florida and raised in Brooklyn, New York to Italian parentage. He was a scholastic standpoint until the age of 12 and only began representing Italy after his parents moved to Europe. He settled in a number of countries including Spain, Hungary and Switzerland while representing the Italian flag since 2005. He has been a USCF Life Member for some time and had maintained his U.S. passport. 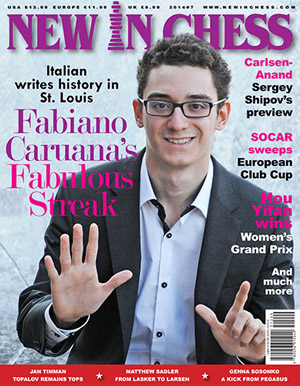 At the same time, the U.S. got considerably younger as Gata Kamsky has already unofficially announced his retirement from the national team. Besides America’s “Big Three” there exists a strong cadre of young players who will be looking to grab the last two spots on the team. With the boom in scholastic chess, tournaments like the Millionaire Open and U.S. contention for Olympiad gold, we may be seeing a new renaissance in American chess.