The first round of the 2015 U.S. Chess Championship got underway and featured fierce battles and even a couple of upsets. While in the men’s field, the young players had a hard time, the women’s field had a couple of nice upsets and could have been three. Annie Wang once made headlines by becoming the youngest female master showed why her wildcard admission was no fluke. Against veteran Tatev Abrahamyan, Wang essayed the French Defense and went into a topical line of the Tarrasch. White got a decent position with space but nothing special until there was an exchange of inaccuracies.

It was when Abrahamyan played 19.f5?! is when the tables starting turning. Unfortunately Wang returned an inaccuracy with 21…Qe7?! which was met by the irrepressible 22.Qc2! with a battery on the diagonal. After 24..axb4, white immediately blundered with 25.Rxf6? and the game came to a crashing end after 25…Bd4! White has to donate an exchange and then a another piece. The upset was complete and the 12-year old vanquished a would-be tournament favorite. At the press conference, Wang was very pleased at her win, but stated, “I feel lucky” and at the brink of winning on 25…Bc5! she exclaimed, “Whoa… did that just happen?”

It goes without saying that the three scholastic players will be playing for scalps and for valuable experience and the mainstays will be hunted. In fact, only Anna Sharevich prevented the scholastic players from getting a clean sweep for the round. In this weird game, Sharevich dubiously sacrificed two pawns and then offered Jennifer Yu a piece with 15…Bc5? White is faced with 15.fxe4 Bxf2+ 16.Kd1 dxe5 and black has no compensation. To sacrifice so recklessly so early only means that Sharevich underestimated her young opponent and fortunately for her, she was not punished. 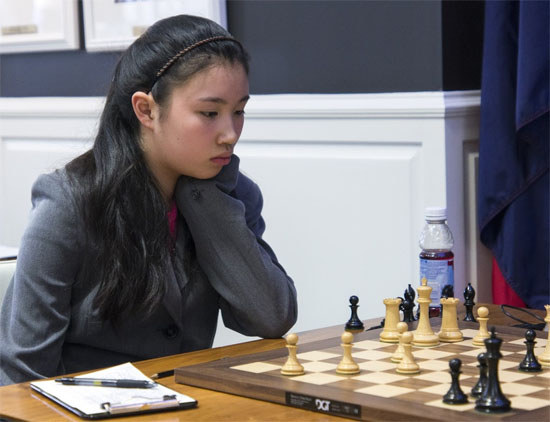 Jennifer Yu missed her chances to capitalize off of a dubious opening of Anna Sharevich. Photo by Lennart Ootes.

As the game wore on Yu had two extra pawns, but allowed black to pry open the position with pawns and batter down the king defenses. With a strong attack, white was in a losing position, but missed the best continuation (39…Rb6!) and was losing again! After jostling of the heavy pieces, the junior player blundered again and ende up getting mated. It was a very disappointing loss for the 13-year old having arrived at a completely winning position in the opening, but panicking in a crucial moment.

The last and oldest junior upended Alisa Melekhina in one of the cleanest victories of round. Melekhina opted for a rather unambitious Closed Sicilian and black appeared to equalize very easily after 18…d5 and 20…d4. After this the position opened black’s nursed a passed b-pawn down the board to achieve a rather trivial winning ending.

In the other games, top seed Irina Krush saved an inferior position against Foisor and was relieved to have come out of the game unscathed. Maurice Ashley kept comparing Krush’s position to Swiss chess as her pawn structure was torn asunder. However a few inaccuracies and a queen trade allowed her to wiggle away. While Ni-Paikidze was relatively quiet, Nemcova-Goletiani was a hard-fought affair with white attaining an advantage throughout, but being unable to covert her extra pawn as the chances melted away along with the pieces. 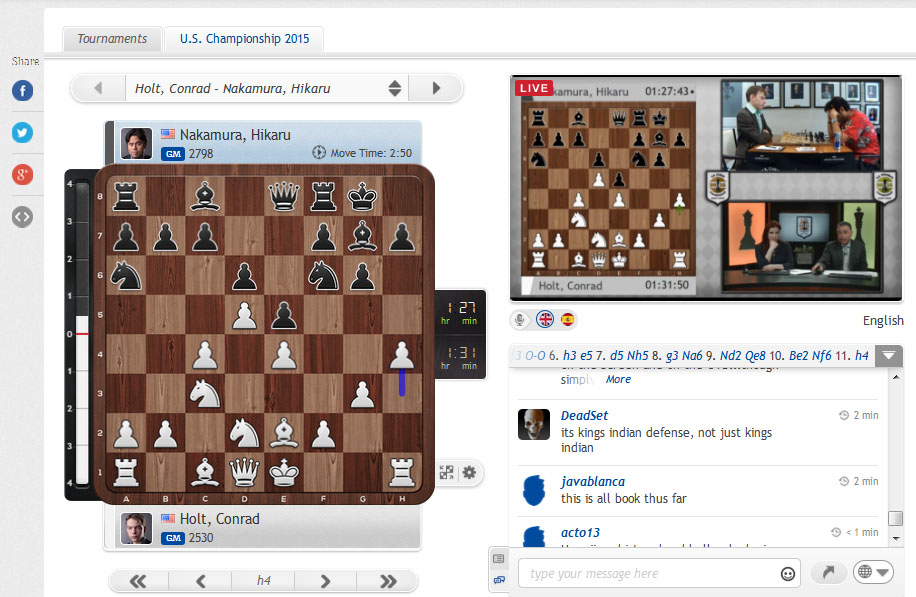 GM Conrad Holt and GM Hikaru Nakamura in round one action.

In the overall championship, Hikaru Nakamura got off to a quick start with a thrashing of Conrad Holt despite a questionable opening. While under immense pressure, Holt blundered after 25.Nf5?? and on 25…Ne1! black had multiple decisive threats including the cute mate (which didn’t occur)… 26.Nh4 Qg2+!! 27.Nxg2 Nf3#. Wesley So also wonbut like Nakamura, he also did not have a convincing showing but took advantage of a blunder after 32.Nexc4?? White’s would end up with two pieces for a rook and would dominate the board. Kamsky-Shankland was rather quiet and ended in 30 moves and Onishcuk-Gareev was a steady draw with no fanfare.

The young stars took a beating in the first round as both Kayden Troff and Samuel Sevian lost there games. Ray Robson faced the Najdorf and trotted out 6.Be3. Troff seemed to go wrong in his preparation and ended facing two laser bishops which sliced his lone rook to pieces. Sevian ended up in a strange ending where white had two central passed pawns. Black would seek to hold them at bay while he pushed his own. Black actually promoted to a queen first, but ended up getting mated as white queened with check!