Let’s start this article with the interview of Fabiano Caruana…

So… another wonderful result by the soft-spoken and polite “Fab Fabiano” who is winning fans by the thousands. Having closed the game in such dashing style, he will have to get a personality to market his ferocity. Here was my suggestion…

@FabianoCaruana on 6/6… being so ferocious, yet polite and humble is too unusual. He should grow dreadlocks! #sinqcup

Dreadlocks??? Uh no, but certainly if Caruana doesn’t want to wear the mane of a lion he is certainly playing like one. His victory over Veselin Topalov was one for the ages… a crushing attack against a Sicilian king stuck in the center of the board. Carlsen commented that Topalov had played “horribly” but Topalov had stated that Caruana simply made no mistakes.

It still appeared that black was safe until Caruana threw the shocking 24.Bxe6! on the board. Commentator Maurice Ashley was using all types of colorful language to describe the mauling that was to come including “Brooklyn beatdown”. Here are some of the images of the moment… 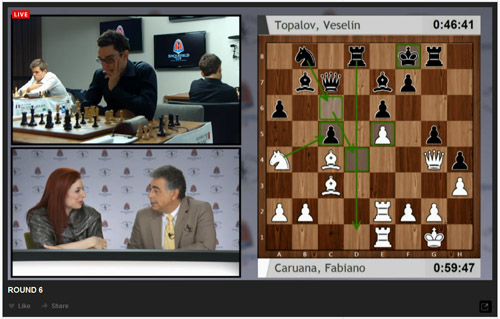 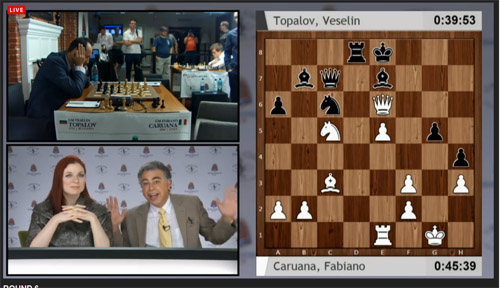 What happens on Bxe6? Will he play it? 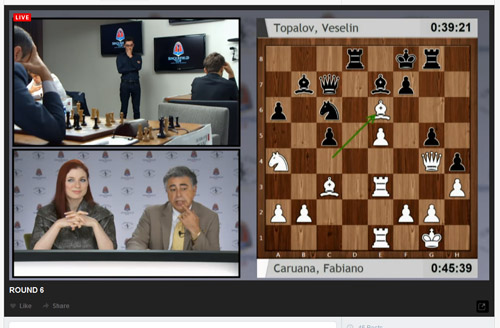 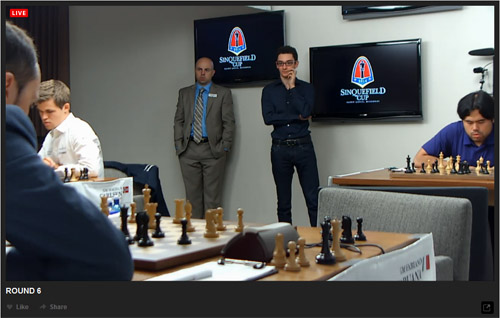 Caruana waiting in the wings after delivering the devastating blow. 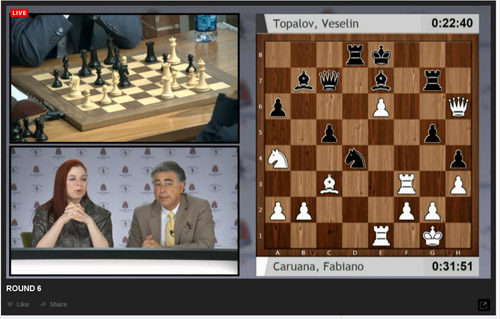 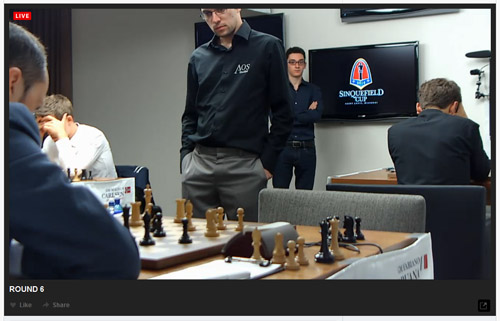 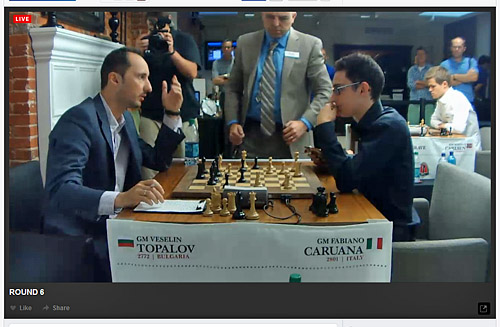 Topalov resigns and was gracious in the post-game interview.

So after the crushing attack, cheers erupted around the Internet here are a few.

Caruana not happy only with the winner's trophy. He also wanted the brilliancy prize! Topalov the fighter always a good opponent for those!

#sinqcup @FabianoCaruana Just flawless chess. An honour to see you in action sir. All those bullet games we played have clearly helped!

I'm so glad Fabiano won again today. I didn't want my cooking for lunch yesterday to be the cause to end his streak 🙂 #SinqCup

OK… so this is not commentary on the game, but you will be seeing lots of analysis soon.

Yes… there were two other games played today… both drawn in brutal battles. Carlsen-MVL was one of those games that Carlsen usually pulls out of his magical hat, but the game steered into an opposite-colored bishop ending with black posting a blockade. Here was his impressions…

In the last game to finish, Nakamura-Aronian played a Berlin and entered a rather staid position. Commentator Yasser Seirawan was critical of white’s 20.Qe1 as was Stockfish which expected a trade of rooks and 21.Bd2. In this position, Ashley commented on Aronian’s 25…Ne6?! as inferior to 25…Na5. The point is that white does not have 26.b4! Despite the passed d-pawn for black, white surrounded and gathered it and the position lost air quickly. Both players amicably analyzed afterwards.