Twitter is a chess player’s haven. News spreads fast and sometimes comments are unforgiving. After Magnus Carlsen gave Hikaru Nakamura his 11th consecutive loss in classical games, tweets rained in from everywhere mocking the American star and his futility against the Norwegian. Neither @MagnusCarlsen nor @GMHikaru have been very active on Twitter so there are no peek into their thoughts, but Carlsen gave this interview…

In today’s game, Hikaru Nakamura “bit the bullet” and tried to go down a known complicated path to catch Carlsen off guard. Somehow he messed up the move order and Carlsen cited 11…Na6 as the culprit. Neverthless, Nakamura fought on but was unable to complicate the game which Carlsen converted without much of a problem. Nakamura seems to be in a funk with his third loss and a spot at the bottom of the standings. All is not loss in that he has another chance to stop Caruana who is simply making everyone his “client”. 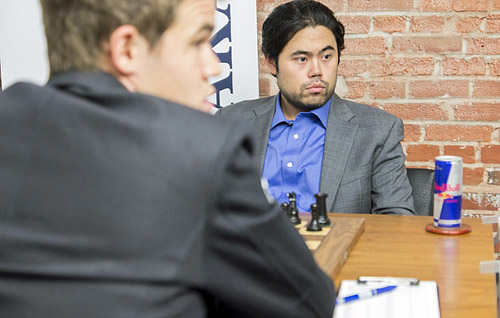 When will Nakamura find the forumula to upend Carlsen? It wasn’t today.
Photos by uschesschamps.com.

In his game with MVL, Caruana played a rather unambitious line, but ended up getting in …f5 and gaining an initiative when white dawdled on the queenside with Qa4. Garry Kasparov, who was watching made a rather biting comment on Twitter when he stated…

I do not believe chess has advanced so much in the 9 years since my retirement that moves like Qa4 and g3 make sense!

after which MVL responded… 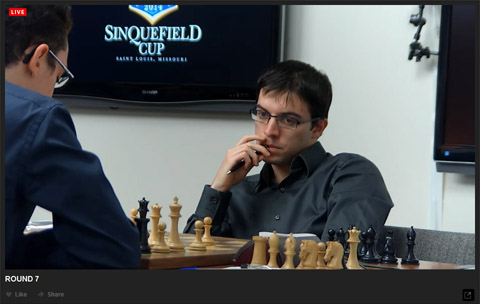 The expression says it all.

Topalov-Aronian played a Catalan game, but nothing happened despite the clash of minor pieces. Black had a slight edge and a better structure, but apparently there was nothing more than a three-fold repetition.

Looking through hundreds of comments on Twitter, you would think that Fabiano Caruana everyone is just discovering him, but this is an unprecedented feat. They say “7” is a lucky number in America, but a romp of 7/7 simply doesn’t happen at this level… or ANY level!

Tomorrow brings an epic batter of Caruana-Carlsen! Lots of questions will be asked… Will Caruana continue his streak? Will he soon overtake Carlsen in rating? Is he the most credible rival to Carlsen? In the above interview, Carlsen stated that he was be seeking revenge, so look for a fierce battle tomorrow.