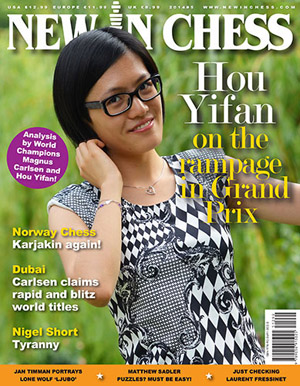 Hou Yifan graces the cover of the latest New in Chess while riding one of the most successful streaks of her career. In the last year, she has gained 50 ELO points and currently is three points behind Judit Polgar on the live rating list. Polgar recently retired from international play after winning a silver medal at the Tromso Olympiad ending a storybook career. It seemed not long ago that the nearest woman was 150 ELO points lower than Polgar.

Hou is the first woman to be featured as a cover story of New in Chess since her compatriot Xu Yuhua was featured as World Champion in 2006. Hou has been on an incredible run and just clinched the final leg of Grand Prix. Closing in on 2700, she will probably get more invitations to test herself against stronger competition.

Hou Yifan has climbed to within three ELO of Judit Polgar and stands to be the new “Chess Queen” after 25 years of Polgar’s leadership. The question is whether she will make an impact on the elite stage. There is nothing left to prove in women’s tournaments.

Hou Yifan looks resplendent on the cover of the magazine with a chess-inspired dress… a look befitting of a chess queen. While Chinese failed to match the men in winning gold at the Olympiad, it is difficult to see anyone toppling her from her perch. Now at 20 years old, her main rival is compatriot Ju Wenjun as Humpy Koneru has tailed off after her recent marriage and subpar result in the ongoing at the Sharjah Cultural and Chess Club, (UAE). There are a couple of nice games from previous Grand Prix tournaments on display.

There is a feature article on Sergey Karjakin’s win in Norway, but most of the article is about Magnus Carlsen and not Karjakin. However, some very good games were annotated including a classic battle between Carlsen and Aronian. Fabiano Caruana’s win over Peter Svidler was also a gem. In an exciting Taimanov, Caruana has shown why he is a legitimate contender for the world title.

FIDE created separate lists for classical, rapid and blitz. For the first time these ratings were put on the line in the World Rapid and Blitz Championship held in Dubai, UAE. Hikaru Nakamura was on the top of both lists but it was Carlsen who would prove to be king in both in addition to his classical title. His latest accomplishment was called the “Triple Crown” (named after a baseball term). However, Carlsen latest woes and the contract impasse adds to his inconsistent form of late.

Lastly, a lengthy, but interesting article on the legendary Ljubomir Ljubojevic.