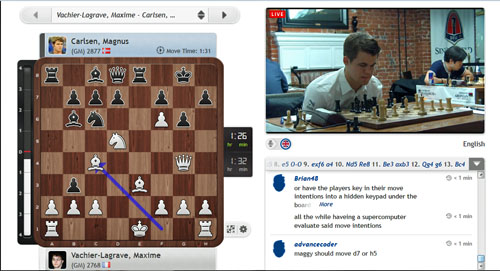 Carlsen had to find the resourceful Nb4!? creating dizzying complications.

There was certainly an inferno in the first round of the 2014 Sinquefield in the game between Maxime Vachier-Lagrave playing white against Magnus Carlsen. Out of a Scotch, the game went into some deep prep by MVL, but Carlsen was up to the task and play the improbable. 13…Nb4!? MVL went into a deep think after playing briskly. While most felt that white’s position was dangerous, the engines liked black’s position. Frankly, it was hard to know what was going on, but after 20…Bb7, the game was completely equal. The game was such a thrill that MVL set to Twitter…

Well, that was an interesting start @CCSCSL

Aronian-Nakamura was an unbalanced battle, but nothing remarkable happened. Out of a Semi-Slav, the players followed theory, but it appeared as if Aronian has a slight pull in the position. That was neutralized by Nakamura’s solid fortress. Perhaps 35.Qc3 Qxc3 36.bxc3 is better, but it is doubtful white can make much of his structural advantage.

Veselin Topalov is coming off of his gold medal performance at the Tromso Olympiad in good form, but he went up in flames against Fabiano Caruana. This was a rare Four Knights English, but Topalov’s 17.g4?! was based on a faulty idea of using the h2-b8 diagonal, but severely weakened the kingside.

Black plowed in and within ten moves black had a decisive edge after 27…Qg4+ 28.Kh1 c4 29.Qc2 Re8! With pressure bearing down, the Bulgarian blundered with 30.dxc4? when 30…Qh5! was the powerful blow bringing him to his knees. The game ended after 31.h4 Qg4 32.Qd3 bxc4 33.Qe3 Rfe7 34.b3 Bb2! The win gave Caruana an early lead in the standings. A great homecoming for Caruana in his first major tournament in the U.S. since moving to Europe.