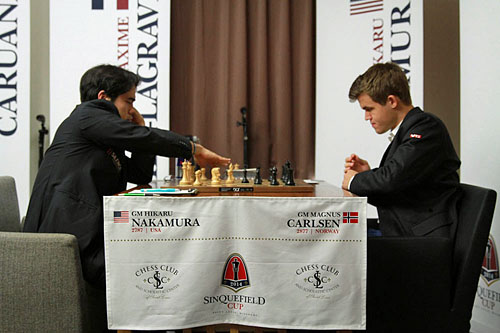 Nakamura tried to score against Carlsen.

There was an anticipation in today’s showdown between Hikaru Nakamura and Magnus Carlsen, but perhaps people have overlooked Fabiano Caruana. During the interview in which he took the “ice bucket challenge,” the Italian-American mentioned that he was glad to be back in the U.S. playing. In the past year, Caruana has marched past a number of players and now sits in the #2 position on the live rating list.

In his game against Maxime Vachier-Lagrave, he sacrificed two pawns for an overwhelming advantage in development. After 8.O-O!? Qxb2 9.Qe1?! (9.Nb5) cxd4 10.Bxd4 Nxd4 11.Nxd4 Bb4 12.Ndb5 Ba5 13.Rb1 Qxc2 white had given up two pawns, but black’s king was living dangerously in the middle of the board and the black queen was on the verge of being overwhelmed.

Commentator Maurice Ashley was offering computer lines where black was sacrificing the queen for two pieces. However, black had to sacrifice material in order to get the king out of the center of the board. When the smoke cleared, white was clearly in control with an extra piece and Caruana would be on +2.

In Aronian-Topalov, the Armenia play an interesting setup ultimately sacrificing the exchange after 13.Nh3 Bxh3 14.gxh3 Bxd4 15. exd4 e3. Topalov miscalculated the position and ended up allowing 21.d5! which gave white a powerful initiative and two raking bishops. This game ended up a total disaster for the Bulgarian as he went down in only 29 moves.

Nakamura-Carlsen was a heavily anticipated battle and there was great tension, but none of the drama that has accented their previous encounters. The game started as a Ruy Lopez, but end up looking like King’s Indian without the light-squared bishops. Black tried to conjure up an attack, but it was only an illusion as the bishop sacrifice on g3 only yielded a draw by perpetual check.