Azerbaijan widens its lead with a crushing victory over Georgia with Shakhriyar Mamedyarov getting a cluster of pieces around the black king with deadly effect. Serbia-Bulgaria drew trading wins on board 1 and 4. Norway kept some momentum as a marquee matchup occurred between Magnus Carlsen of Norway and Fabiano Caruana of Italy. 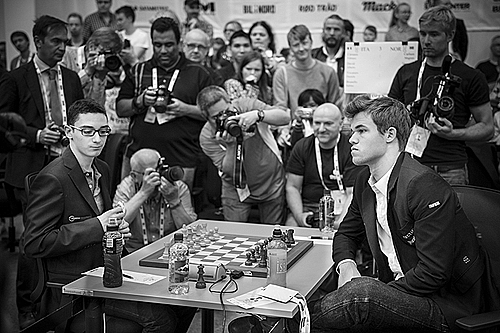 Fabiano Caruana (Italy) vs. Magnus Carlsen (Norway)
Will this be the early stages of an official rivalry?
Photo David Llada.

The American-born Italian is one of the few players to have a plus-score against Carlsen. However, today’s game showed that while Caruana has aspirations, Carlsen has a few of his own. Cuba is clearly falling under the radar against they trashed Kazhakhstan to vault into second place in the standings. The Cubans, who just finished a tour in the U.S., have now put themselves into a position to win a medal.

Russia, France, the Netherlands and China are still in a good position to medal. China pulled into 4th place with a 3½-½ verdict over Egypt. This Olympiad may be a breakthrough for non-European teams as China, Cuba and India are making their presence felt. Armenia also had a slow start but could be back into medal contention with a couple of wins. They turned back England on the strength of Sergei Movsesian’s win over Nigel Short.

China and Russia are in a neck-and-neck for the gold and will face each other tomorrow after both scored convincing wins over Hungary and Serbia respectively. Hou Yifan has won four games in a row and seems to be in form. Kateryna Lagno is on +3 in a team missing the Kosintseva sisters.

This tournament could very well go down to a China-Russia foot race. Both carry unblemished 6/6 records going into their showdown. Of course there are other strong nations comprising of the usual chess contenders. Besides China and Russia, the top ten includes: Poland, France, Romania, Hungary, Indonesia, USA, Armenia and Georgia. Indonesia is a rising force in Asian chess and is making quite and impression.

The Chess Drum with Claudia Munoz