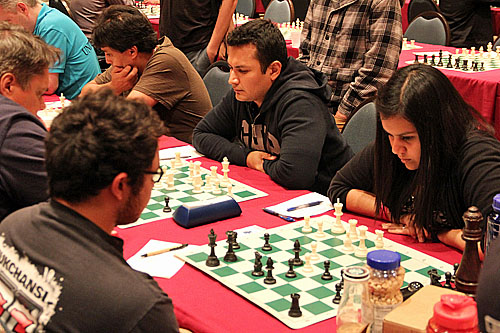 Claudia Munoz at the 2014 U.S. Open.
Photo by Daaim Shabazz.

Claudia Munoz is known in chess circles for her chess promotion activities in social networking. The 16-year old is the reigning National Girls champion and took part in the U.S. Open where we conducted a short interview. Enrolled in Texas Virtual Academy, an online school for those youth looking for a more flexible schedule.

The charming daughter of Mexican nationals, she wears a 1000-watt smile and is quite enthusiastic in her chess pursuits. She recently stated that she wanted to be a role model for Hispanics. As a dual citizen she has competed in both U.S. and Mexican national events.

I'm blessed that I won the U.S. Girls Junior Chess Championship. As a #Hispanic I'm looking to inspire other #Latinos pic.twitter.com/fFRwrbecfC

A month ago she won the inaugural National Girls Closed Championship and with the trophy came a $10,000 scholarship to the University of New Hampshire. After the interview, The Chess Drum asked if she was going to opt for an online university program. She was undecided, but she was evaluate her options which includes scholarship opportunities at traditional universities. We look forward to her continued contributions. A very charming girl indeed!