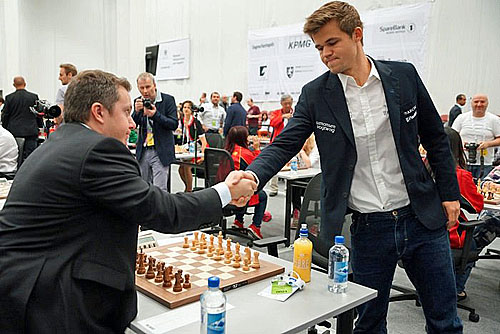 One of the shocks of the round was not Germany’s win over Norway, but the fact that Magnus Carlsen bungled a pawn advantage into a loss. The World Champion showed some frustration after the game while doing a quick post-mortem. Meeting Naidistch one can sense this was an extremely important victory in his career.

Every match is considered a crucial match from here forward and each game is going to be important in determining tiebreak advantage. Russia was stunned by the Czech Republic by a convincing 3-1 score and perhaps Russia’s chances are already slipping. Russia is always the rating favorite, but there is something missing in their match strategies and they were punished again.

Cuba had jumped atop the leader board last round, but lost a close contest to Azerbaijan dropping them to 7th. As is common in these competitions, a loss can drop a team far out of the top positions. Azerbaijan, the European Champions, jumped back into 1st place followed by China (who crushed Serbia 3½-½),the Czechs, Bulgaria (Iotov is on 6½/7) and Romania (despite the absence of Nisipeanu). Defending champion Armenia struggled once again and drew with Hungary while France and the USA moved further up the board with convincing wins.

Following is a gem by GM Leinier Dominguez: 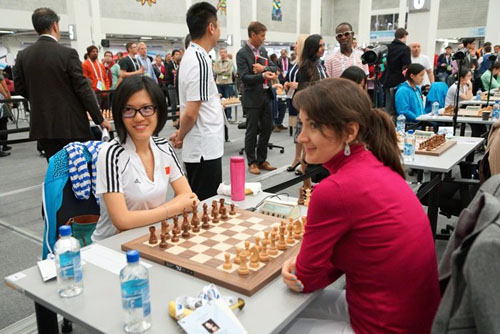 The highly anticipated China-Russia match ended up in a 3-1 shocker in Russia’s favor. Lagno beat Hou Yifan who had previously won four in a row. The Ukrainian who now represents Russia has shown that the loss of the Kosintseva sisters keeps them as a formidable force.

There is already talk about a Russia “threepeat” but such talk is rather presumptuous with many rounds to go. It is interesting the same teams vying for medals in the open section are the same ones competing in the women’s. This shows the investment federations are putting into intensive chess training.