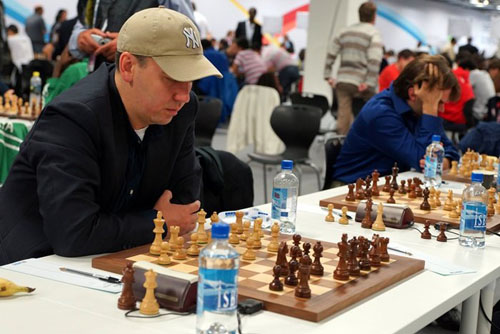 When was the last time a top 50 player has lost to another player 300 ELO points below in the Olympiad? It would be a matter of record in finding out, but it happened in the fourth round of the Tromso Olympiad when Gata Kamsky (2706) of USA was toppled by IM Henry Steel (2399) of South Africa. It appeared that the match would be 4-0 for the Americans when Kamsky started to dawdle in a completely winning attack. Nevertheless Steel was able to keep the game complicated in order to keep chances alive.

White had two connected passed pawns, but with his king cut off and the two bishops occupied with stopping black’s passed pawns, he ended up in a disastrous ending and ended up ceding the full point. This could be a disastrous loss for the Americans if they are in the medal hunt. Kamsky is clearly out of form and will probably take a rest in round five.

Vassily Ivanchuk is also having a tough time getting his form and in Bangladesh-Ukraine match drew in 15 moves against GM Ziaur Rahman. Ukraine would will rather handily and will move back up into the top boards after being held by Norway 2.

In other action, reigning European champions Azerbaijan beat France to move into the top position… Serbia 2½-1½ Czech Republic, China 2-2 Russia (Russia was fortunate to draw), Netherlands 2-2 Israel (Giri beating Gelfand) and Bulgaria 2½-1½ Romania (two old rivals). Norway 2 keeps pace as Magnus Carlsen got the win over Radaslav Wojtaszek. In this game, look at white’s move after 29…Qb6? Carlsen spotted 30.Bh3! Rd8 31.Be6! with a virulent attack on the h-file.

In other action Jordan and Palestine drew 2-2 (two wins apiece) with both sides grappling with geopolitical issues at home. Jamaica beat regional rival Barbados 2½-1½. These types of dynamics makes the Olympiad a very interesting tournament. While it not likely that Israel would face Palestine, it would be a possibility to face Iran. It would be a match that would certainly evoke high emotions.

The surprise of the round has to be the performance of Iran who won their fourth straight encounter crushing Slovakia 3½-½. Of course, they have been improving for a long time and are led by the stately presence of WGM Atousa Pourkashiyan. However, her teammates were the ones carrying home decisive games.

China kept their lead with a 3½-½ thrashing of Azerbaijan, a team made up of chess families. Where chemistry is an important part of team events, this would certainly not overcome the relative strength of the Chinese who were 200 ELO points better on each board.

Russia kept pace by pipping Germany 3½-½ with Kateryna Lagno taking a rest break. European champion Valentina Gunina and Alexandra Kosteniuk carried the victory with wins. Traditional power Georgia drew with the Netherlands setting up a date with Russia in the next round. Lots of history between those nations. 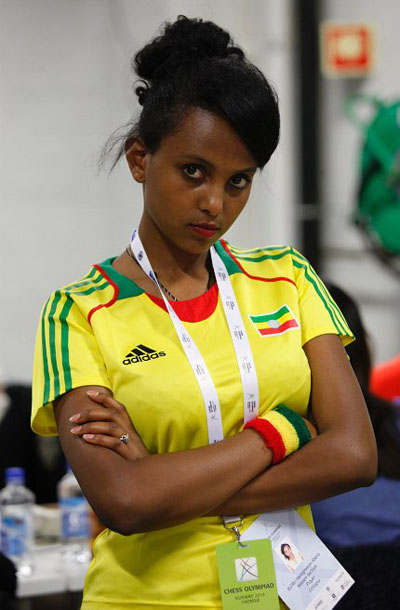 Darrian Robinson in the news!