The Ukraine has won two Olympiads of the past five with Armenia winning the other three. They are always a credible threat to compete for the gold. A few years back Sergey Karjakin bolted for Russia and last month top woman ace Kateryna Lagno did the same. These defections clearly weakened the Ukraine, but they still boast strong teams. In fact Anna Muzychuk has returned to the Ukraine from Slovenia. However something has gone wrong in the early stages of the Olympiad.

The men have faltered and Vassily Ivanchuk has not played near his strength. Today they lost to Uzbekistan. Ivanchuk lost to Rustam Kasimdzhanov (which is no disaster) and drew in a lackluster 15 moves in yesterday’s match. In past Olympiad, Ivanchuk has been an “iron man” by playing all the games. Something has gone awry and in today’s game he hung a piece and resigned. The women are also having a difficult time after being crushed 3-1 by Serbia. Is the current conflict in the Ukraine affecting the players?

The matches were close at the top with Azerbaijan-Serbia, Russia-Bulgaria and China-Netherlands drawing at 2-2. Armenia got back on track with a win over host Norway. Carlsen was able to hold Aronian despite being slightly worse in the game. Cuba notched an important win over Israel putting them in 5th place. The USA is having an uncharacteristically bad stretch as a beleaguered Kamsky sat in lieu of his poor showing. Yet they could only score a draw with continental neighbor Canada. Sam Shankland saved the match by pressing for the win. 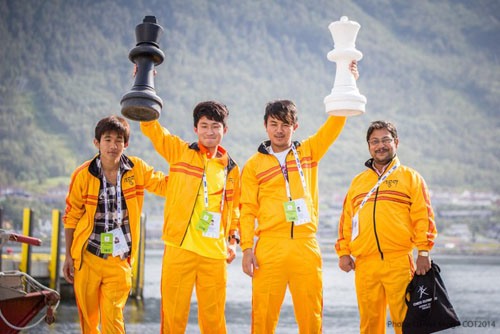 China continues to roll with another 3½-½ verdict… this time over Indonesia. China leads 10 pts on 18 game points followed by Hungary on 10 and 16.5 and Russia with 10 and 15.5. China seems determined in this tournament given their disappointed look at the closing ceremonies in Istanbul. Hou Yifan is in incredible form and is twelve ELO points from Judit Polgar who has long been the highest-rated female player in the world. Perhaps Polgar should challenge Hou Yifan while she is still higher rated!

Russia kept pace by pipping Germany 3½-½ with Kateryna Lagno taking a rest break. European champion Valentina Gunina and Alexandra Kosteniuk carried the victory with wins. Traditional power Georgia drew with the Netherlands setting up a date with Russia in the next round. Lots of history between those nations. 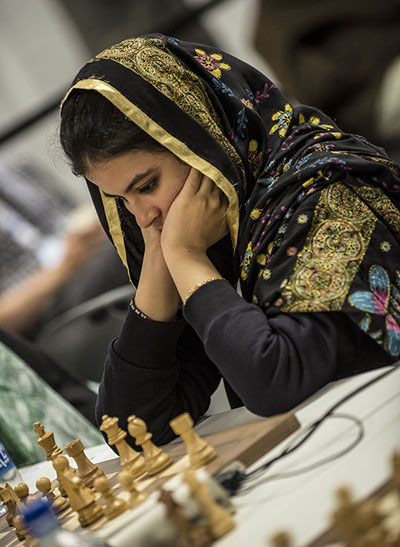 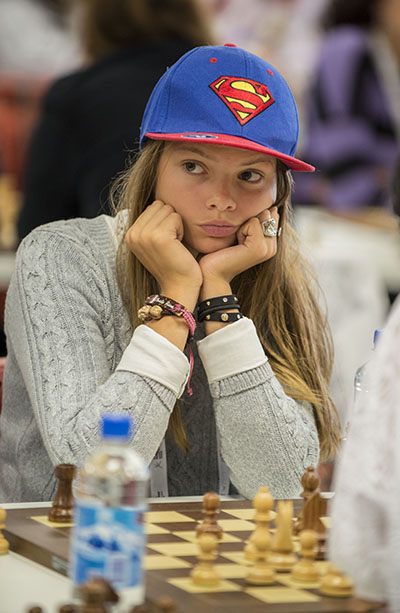 …while Elise Jacobsen of Norway had another type of head wear!
Photos by David Llada.