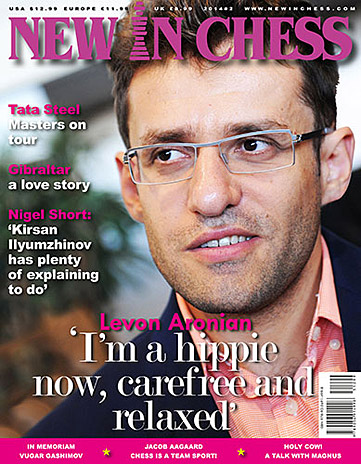 Levon Aronian is a self-described “hippie” and graces the covers of the current New in Chess. Winning the Tata Steel Chess Tournament was not exactly a surprise and the Armenian asserted his #2 status. There is a lengthy interview with Dirk Jan ten Geuzendam in which he reveals his mellow charms. With a storied career going, an always affable Aronian weighed in on his success and as a potential world championship challenger (Viswanathan Anand won the Candidates Tournament). The interview is conducted by Dutch phenom Anish Giri.

Of course, what would a New in Chess issue be without at least one feature on Magnus Carlsen. The world champion conquered the Zurich Chess Challenge despite a rocky end of the tournament. Fortunately, his performance in the classical segment carried the tournament for him. Carlsen escaped a losing position against Hikaru Nakamura which carried a side story. In the previous edition of New in Chess (2014/1), Nakamura said he felt he was the biggest threat to Carlsen.

“But I am never happy when one of my rivals does very well. I want the games to be interesting, but I still want to win by a large margin.”

Carlsen actually won the game, but may realize that Nakamura will persist until he breaks through with a win. However, Carlsen now faces a rematch with Anand in November, who surprisingly won the Candidates Tournament. Carlsen snatched the world crown from Anand and has not played much outside of Zurich. He has been doing promotional work including a now-famous game with Bill Gates.

In an indepth interview, Carlsen talked about a wide range of tops including the championships match, the aftermath and the upcoming FIDE election. He also gives an assessment about future challengers citing Levon Aronian as the one who impresses him the most. The interview was done before the Candidate’s tournament where Aronian performed rather poorly. As mentioned Carlsen will have his first title defense after hosting the Olympiad.

It appears he is taking it easy traveling to far flung places like Brazil, giving exhibiting and making videos with his manager Simen Agdestein. It was also revealed that he only had Jon Ludwig Hammar as his second for the World Championship match. That is likely to change in the rematch. Asked what he plans to do as World Champion and he mentioned going to the FIDE Presidential Board meetings. Interesting answer.

Also is this issue is a nice tribute to Vugar Gashimov, who died this year at the age of 27 (malignant brain tumour). The Azeri star was a big loss in professional chess and Shakhriyar Mamedyarov uttered the most poignant words of his compatriot. There is an upcoming Memorial that will include Carlsen, Nakamura and Fabiano Caruana. He left these immortal words about a colleague whose calm demeanor he admires:

“Viswanathan Anand really appeals to me. I very much empathize with people who, after achieving success and recognition, don’t lose their positive human qualities… I always trained myself to believe that you have to be equally calm about wins and losses. What has happened is already behind you, regardless of whether you lost or won. You have to think about the next encounter.”

Anish Giri did an insightful interview with Levon Aronian who had won the Tata Steel Chess tournament. The world’s #2 player discussed his turnaround after his poor showing at the Sinquefield Cup and his approach to clearing his mind and keeping a positive attitude. Spending time with family, friends and of course Arianne Caoli mellows his soul and his penchant for the jazz greats feeds his creative spirit. Aronian is certainly of the of most affable characters in chess and is well-respected.

When asked about his rivalry with Carlsen he was a bit coy about the issue. He refused to acknowledge a rivalry, but it is certain that he will be a force to be reckoned with. With Anand earning a rematch, Aronian will have to wait for the next cycle along with Nakamura and others such as Caruana. Aronian’s carefree attitude works for him, but to challenge Carlsen, he may have to show another side. Interesting interview.

Interesting segments on Gibraltar, Wijk aan Zee and the usual Nigel Short rant about FIDE’s shortcomings and inefficiencies. It appears that Short’s excoriations of FIDE will gain traction as Kasparov will put up a formidable fight.