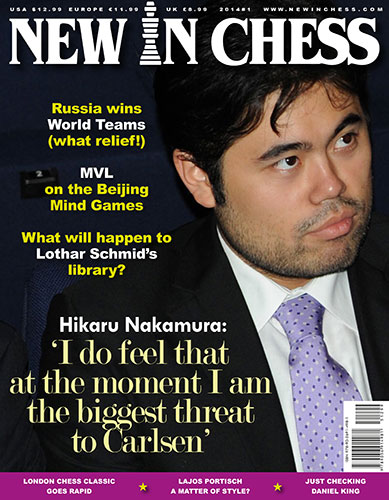 New in Chess rolls out the first issue of the year and there has been an immediate change. No… not a new look. Still excellent content and coverage, but unlike last year when the first issue featured Carlsen, there is a different player featured. Carlsen clearly dominated last year winning several elite events culminating in winning the World Championship 6½-3½ over Viswanathan Anand. Thus, Carlsen was on 4/8 covers last year. This year Hikaru Nakamura graces the cover and incidentally pegs himself as the “biggest threat to Carlsen”.

Next month, the Candidates match will take place and decide his first challenger. While Nakamura will be one of those threats, so will eight others. In fact, Nakamura will not participate in the Candidates, but cited both Levon Aronian and Vladimir Kramnik as those who would have given Carlsen a better fight than Anand. Both will have a chance, but he makes note that four of the top ten players are not in the Candidates.

Nakamura, Fabiano Caruana, Alexander Grischuk and Boris Gelfand did not qualify, but certainly the young crop of elite players will challenge Carlsen for years to come. There is speculation on how long Carlsen will rule chess. There have been guesses of 10-20 years and those who feel he will not defend successfully.

Dirk Jan ten Guezendam interviewed the 26-year old Nakamura is a lot different from the player we saw ten years ago as a young American phenom. The earlier version spent countless hours playing bullet chess on the ICC and set all kinds of rating records. Now he goes on record to say he prefers classical because of the higher quality of the games. Nakamura has certainly taken a more professional approach to the game as he has gotten a valuable sponsor and he has decided to work alone while maintaining a cadre of “chess friends”.

Four players in the Top-10 who are not in the Candidates tournament certainly show there is a problem in the format.

~Nakamura on the championship cycle

He gave very interesting insights on the championship match in a seemingly disappointed tone. Even throughout the match, Nakamura was tweeting that Anand was not assessing positions correctly and was shocked at not converting Game 3. Nakamura stated that he is beginning to adjust to Carlsen’s style and the games at the Sinquefield (assisted by his Ray Ban sunglasses) showed a greater insight. However, in the recent tournament in Zurich, he failed to convert a winning position. The struggle continues and he appears to be getting closer.

Judit Polgar was given a 25-year tribute for topping the women’s rating chart. At 2693, she is still a healthy 60+ points ahead of World Champion Hou Yifan. Having reached #8 on the rating list and a career-high of 2735 a year later, she is still touted as the strongest woman ever to play. Hou Yifan will be hard-pressed to reach #8 in the world, but it may be plausible to close the rating gap a bit further. There was a mention about a possible match between the two. Polgar does not compete as much as in the past, but she finds the idea attractive. Meanwhile she is writing books, promoting chess and raising a family. Will we see such a match? Time will tell.

The 2013 World Minds Sports Games took place in Beijing, China with the usual flair, but with some differences. There were the same five sports…chess, go, draughts, bridge and xiangqi, but in chess there will be a new format introduced.

Maxime Vachier-Lagrave wrote about the tournament and did not spare himself criticism for his poor result in the rapids. On full display was his crushing loss against Peter Leko. However, he was able to get the bronze in the blitz format behind Sergey Karjakin and Aronian. The newest format was the Basque format where each player plays two boards simultaneously with alternate colors. Karjakin won that with a stunning 8½/10. Interesting games featured.