Guyana’s lone national arbiter Irshad Mohamed was voted in as the new President of the Guyana Chess Federation (GCF) on Sunday last when the local governing body held their elections of office bearers. 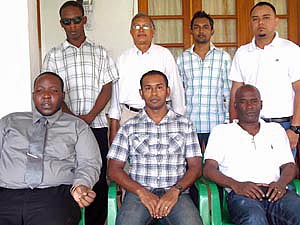 New President of the Guyana Chess Federation Irshad Mohamed (seated centre) with members of his executive after last Sunday’s AGM.
Photo by https://www.kaieteurnewsonline.com.

Mohamed replaced fellow businessman Shiv Nandalall, who did not seek re-election after serving two consecutive terms at the helm. Nandalall had taken over from veteran chess player and columnist Errol Tiwari, who was elected to head the GCF when it was resuscitated back in 2008 after almost two decades of dormancy.

After being elected on Sunday, Mohamed said his priority is the development of the sport among youths. “We want to tap into the schools and focus more on the growth and development of the game among the youth population,” he stated. Mohamed is also keen on having Guyana compete at the Olympiad in Norway in August, as well as when the GCF hosts the CARICOM championship later this year.

The new GCF boss called on his executives to work in the best interest of the game’s development, while he urged stakeholders to play their part in ensuring progress is made during his tenure.

The other members of the executive are: George Vaughn (Treasurer), Wendell Meusa (Chess Trainer), Ronuel Greenidge (Secretary) and Wayne Browne who will be in charge of Fund Raising activities. Committee Members are Krishnanand Raghunanand, Maria Thomas and Ryan Singh.