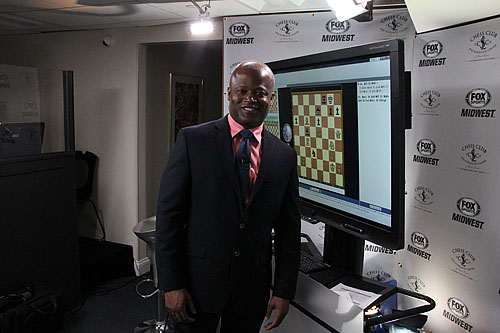 GM Maurice Ashley did an excellent job with on the spot analysis. 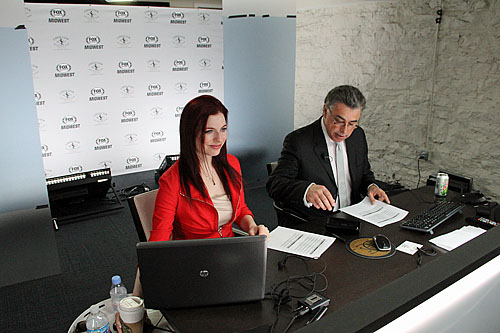 Wow! What an ending. Alejandro Ramirez came through with a clutch win over Larry Christiansen putting him in a virtual tie for first with Gata Kamsky. Kamsky was held for the fifth game in a row and perhaps his motivation is a factor since he has already clinched a spot in the World Cup. Thus, Ramirez rallied and won a pivotal game against “Big Larry”. 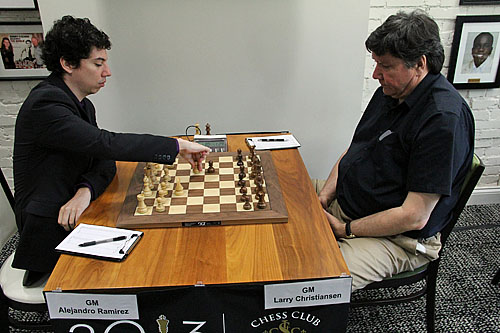 Ramirez ‘stormed the barricades’ of Christiansen’s forces and has rallied into joint first.

Perhaps Ramirez has been reading Christiansen’s “Storming the Barricades” or “Rocking the Ramparts” because that is exactly what he did against the author. Kamsky on the other hand, played an unusual 5…b6 and white got a comfortable edge. Robson later seized an opportunity and sacrificed an exchange for a pawn and stated later that he overestimated his chances. The game had a few volleys, but a dynamic equality was achieved. 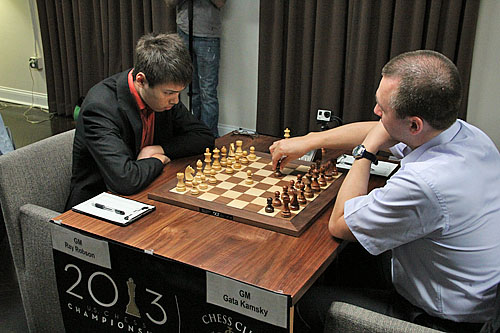 Kamsky’s sluggish second half has made him vulnerable. Going into the playoffs, it is not a good state of affairs.

By the way, both Christiansen and Alexander Shabalov were the two players who had all decisive results. Shabalov ended with a nice combination (22…Ne2+!) against Ben Finegold, true to his swashbuckling style. On other action young debutant Kayden Troff ended his tournament on a high note by drawing Onischuk and ending on +1 and a 2614 performance rating. GM Conrad Holt ended on a loss against GM Timur Gareev, but ended on +2 and 2679 performance rating. Twelve-year old Samuel Sevian also had a respectable result with -1 and 2474 performance.

In the women’s competition, Irina Krush successfully defended her title with a draw against Camilla Baginskaite. Actually, Krush had winning chances, but decided to accept the half-point and thus clinching the title. Meanwhile Anna Zatonskih finished a strong second half with another win this time over Sabina Foisor. Both Krush and Zatonskih have traded titles for the last decade.

Video by Macauley Petersen for uschesschamps.com.

Both Ramirez will play a playoff with the following conditions (from the official regulations):

Two Players: The tie will be broken with a two-game rapid match (G/25+5). If the contest is still undecided, the match will be decided by an Armageddon Game.

An Armageddon Game is defined as a game with base time of 45 minutes for each Player. Black will have draw odds. Each Player shall bid an amount of time (minutes and seconds, a number equal to or less than 45:00) with which they are willing to play in order to choose their color. The Player who bids the lowest amount of time chooses his color and begins with that amount of time; the other Player receives 45:00. If both Players bid exactly the same amount of time, the Chief Arbiter will flip a coin to determine who shall choose their color.