In the penultimate round of the 2013 U.S. Championships, excitement simmered at the prospect of clinching results by leaders Gata Kamsky and Irina Krush. The pivotal matchup of Abrahamyan-Krush was going to be the crowd-pleaser. 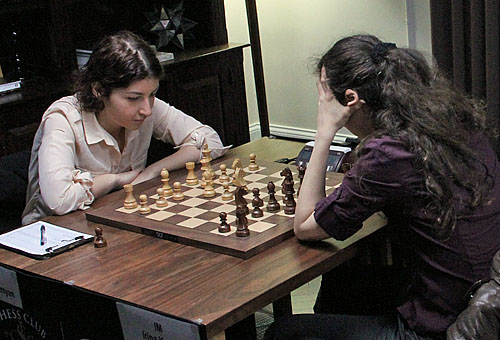 In this Sicilian Taimanov, there a serious battle brewing as Abrahamyan launched 10.g4. An opposite wing race ensued, but the g-pawn was soon sacrificed to access the g-file. However, after 16…Bxg5 17. Rhg1 f6 18. Be3 Nxe2 19. Qxe2 Bxe3 20. Qxe3 Kh8 the black king was tucked safely away. Abrahamyan was unable to mount any play for the pawn and Krush consolidated and collected the point. This guarantees Krush a tie for first with Anna Zatonskih in clear second… Abrahamyan eliminated from contention.

Zatonskih beat Iryna Zenyuk in a game where white became overextended and the weaknesses resulted in blacks forces crashing through in dramatic fashion. Zatonskih will play Sabina Foisor, but Krush only requires a draw against Camilla Baginskaite to successfully defend her title. Alena Kats recorded her first win beating Anjelina Belakovskaia, a three-time women’s champion. 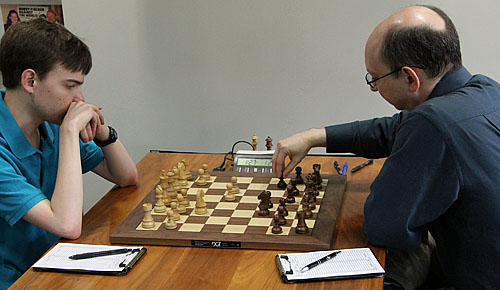 The youth movement has been in full force in the ’13 championships. Here Conrad Holt, a sophomore at University of Texas-Dallas, defeats three-time U.S. Championship Joel Benjamin. Photo by Daaim Shabazz.

In fact, Troff is vying for a GM norm and faces Alexander Onischuk in the last round. Troff ended his win against FM John Bryant with the picturesque 45.Nh8! Meanwhile Holt got into a Bogo-Indian, collected an extra pawn and ushered a passed c-pawn up the board. With a strong bishop on g2 this combination of trumps gave Holt an upset victory. He is still in contention for one of the top six spots in the World Cup.

Meanwhile, there is only one point separating the top six spots in the “men’s” field. Kamsky (6/8) was held yet again by Timur Gareev making this his fourth draw in a row and allowing Alexander Onischuk, Alejandro Ramirez and Holt (5.5/8) to pull within striking distance.

Hikaru Nakamura was following the Kamsky-Gareev game and told his stepfather Sunil Weeramantry that Kamsky may be in trouble early on. However, as the game wore on, it was clear that whatever advantage Gareev had, had dissipated. Kamsky gained momentum and on the way, collected two pawns. One of them actually promoted to a second queen, but Gareev had a saving perpetual check. 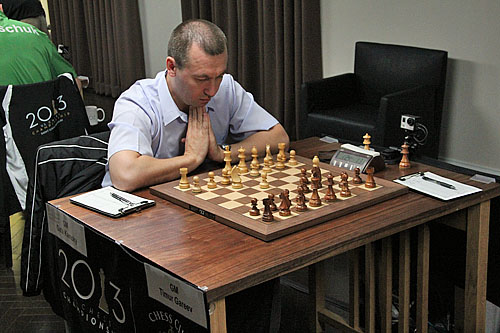 Kamsky-Gareev was a rollercoaster. Kamsky’s ‘namaste’ pose would prevail in what was otherwise a very violent battle. Photo by Daaim Shabazz.

Perhaps the craziest game of the day was Shabalov-Robson, another Taimanov. White launched a very standard attack with the battering ram of e4, f4, and g4 pawns. Black was able to prevent the wholesale collapse of his position, but white’s attack was dangerous indeed. However, Houdini assessed Black as being slightly better after 25.Rde1, much better after 29.Qg2 and completely winning after 31. Rh3 Qxh3 32. Qxh3 Bxg1! The valuation got as high as -4.75 for black!

Robson started to dawdle with 37…Nh6? (37…a3! was crushing). In the press room, commentators Maurice Ashley and Yasser Seirawan were telling Robson about these lines. After 38. Bxg5 a3 39. Bxh6 Bxb2 40. Nxb2 Rxb2+ 41. Kc1 white was back in the game! However, in time pressure Shabalov started checking with his queen and lost the balance. Robson “two-rook” attack rendered white helpless. This Shabalov loss means that both he and Larry Christiansen are still the only ones who have not drawn a single game.