Those in America may be familiar with the Morgan Freeman movie, “Lean On Me” about the troubled Eastside High in New Jersey revived by Joe Clark. That film was based on a true story, but there are others being lived today. One such story is Edwards’ program at Innovative Concept Academy. It is a unique program that has gained a lot of attention. 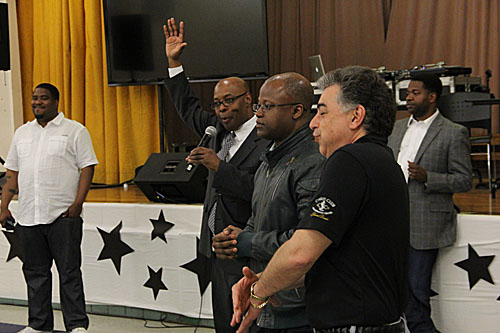 “I started Innovative Concepts Academy because I was tired of seeing kids come through juvenile court only to return to an environment and a home life fraught with problems. While I cannot change many factors that contribute to a child’s delinquency, I knew I could do something about idle time and lack of supervision.”

Judge Jimmie Edwards, who sits on the bench at the 22nd Judicial Circuit of Missouri, took an assessment of the social blight afflicting St. Louis downtrodden communities. Being one of the officials having seen the deleterious effects of poverty and violence Judge Edwards created a novel alternative school to help students who had either been expelled from committing low-level misdemeanors including drugs and assault.

Part of his vision is to create a self-respecting environment that provides student was love and support that may be lacking in other areas of their life. This can be seen as a throwback to the days of after-school programs and “social center”. This idea has won Judge Edwards acclaim and institutions and organizations have been studying how to replicate such a successful model.

The Academy has a number of novel concepts such as a mandatory immersion in chess, home economics, fitness center and even a music production studio. All of this while imposing a strict code of discipline and dress. No “sagging” allowed and no profanity. There is a boxing ring if two students are angry and want to go blow off their steam.

It is amazing how his approach has reformed self-destructive behavior of youth who were facing a life of criminal behavior. His program has morphed from 30 to 500 (maximum). This growth has gotten the attention of media outlets and has resulted in Judge Edwards receiving a “Heroes of the Year” award from People magazine. With that he received $10,000 award which he will use for the school’s arts and drama program.

Adisa Banjoko showed the students the linkage between hip hop, chess and non-violence and included a jiu jitsu component by Alan “Gumby” Marques with music by Mike Relm. Chess players Yasser Seirawan, Maurice Ashley and Jennifer Shahade then played all willing students. Of course the students were amazed at the level of play of the chess masters as they won one game after another. Fifteen-year old U.S. Championship competitor Sarah Chiang was also on hand to play the students. After the exhibition, the students went back to their classes and the chess contingent was taken on a royal tour of the facility formerly known as the Blewett School.

Listen to interview with The Chess Drum!!
(8:05 minutes) 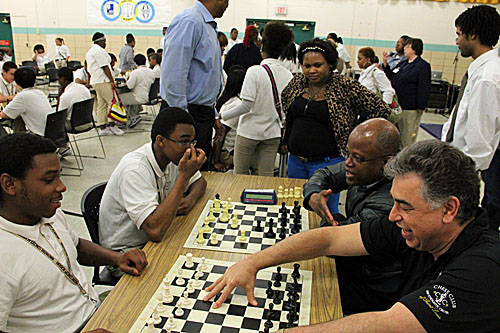 GMs Yasser Seirawan and Maurice Ashley trying to defend their honor against all takers. Ashley got a close shave from one of the adult players! 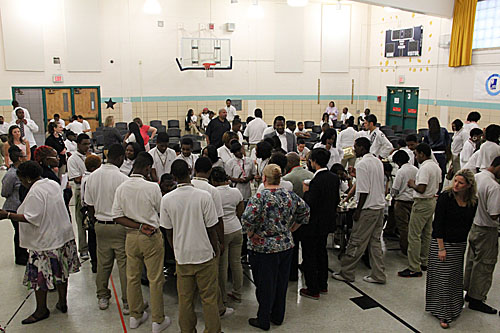 After awhile crowd assembled in fascination. It was great fun! 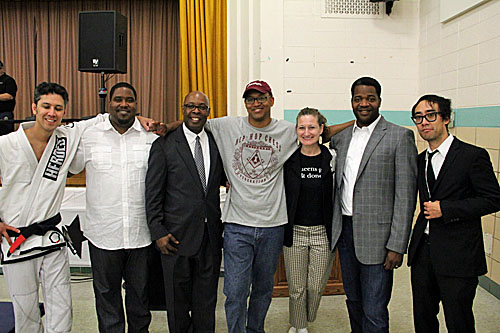 Kamsky, Krush lead at the break