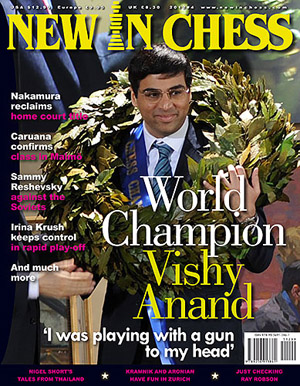 This issue of New in Chess has a number of headlining stories including the cover story of the World Championship between Viswanathan Anand and Boris Gelfand. Several stories were presented including a very lengthy interview with the champion who spoke candidly about the match. The vision of Andrei Filatov of combining art with the championship match seemed to have worked well (apart from the interruptions of the match coverage to discuss art) and the match was a rousing success.

However, what is a match without controversy. Many fans riled about the lifeless games in the match and the article discusses this in great detail. What was interesting was the behind-the-scenes descriptions of both teams and the psychological preparation. This shows the intensity of the match beyond the 16 games played.

In an interesting admission, Anand felt that he was in danger and his match strategy was being thwarted by Gelfand’s team. He asserted that the pressure was immense… “I understood I was playing with a gun to my head” he said in an interview. Very interesting look at a side we have not seen of Anand. 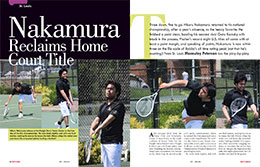 The U.S. Championship was an event that was concurrently taking place with the World Championship and many fans opted to watch Hikaru Nakamura and Gata Kamsky instead of Anand and Gelfand. This tournament was perhaps the best in recent years and had all the drama and tension that national championships often have. Nakamura was the favorite going in, but Kamsky would challenge him leading up to their marquee matchup in round 10.

Interestingly enough, Nakamura did not qualify for the U.S. Championship, but along with Yasser Seirawan, got a spot through a wildcard nomination. Of course, this has turned out to be a good feature in the selection process. There were some exciting analysis given including Nakamura-Robson Dragon battle annotated by Robson and the titanic Kamsky-Nakamura matchup in a Najdorf. Also covered was the thrilling battle in the women’s championship with Irina Krush beating Anna Zatonskih in a tie-breaker.

A very interesting story on the American Samuel Reshevsky and his participation in the classic Zurich 1953 tournament. This tournament is still widely considered one of the world’s classics. The article talked about ideas of Soviet collusion to ensure that non-Soviet could not vie for the tournament crown. At first Reshevsky refused to play and his manager gave this reason:

Could we expect Reshevsky, eve if he were world champion, to defeat, in a single tournament, 9 Russian Grand Masters, all of whom would play terrifically hard against him and easily against each other. From every standpoint, the arrangement is unfair and inequitable, and I shall not blame Reshevsky at all if he refuses to compete in the Candidates’ Tournament.

Reshevsky ultimately played and came in joint second with David Bronstein and Paul Keres behind Vassily Smyslov. It was a very intriguing essay on the suspicions later repeated by Bobby Fischer in his ascent to the world championship. 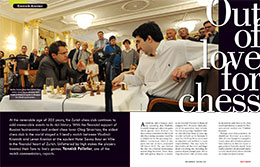 Speaking of Zurich, prior to the world championship, there was a six-game match between Levon Aronian and Vladimir Kramnik. It was held in Zurich. This prequel was exciting with plenty of novelties and enterprising play. This would serve as a training ground for the Candidates in March 2013. The match ended in a 3-3 draw with two rapid games also being drawn.

Fabiano Caruana’s ascent has been rapid but steady. His triumph in Malmo, Sweden was captured in an essay by fellow-phenom Anish Giri. It is always good to read of tournaments off the elite circuit and to see the game of talented players like the dreadlocked Nils Grandelius and Hans Tikkanen.

Nigel Short wrote another travelogue on his triumphant trip to Thailand where he would be the top seed in the Thailand Open. Closing in on 100 countries on his passport, he described his latest trip and the pleasures of the increasingly-popular chess open. Hou Yifan also played in the tournament, albeit with unimpressive results. Short wrote,

Hou’s uneven play, on the back of a disappointing Chinese Championship, indicated that her phenomenal result in Gibraltar has not yet brought a permanent shift to a higher plateau.

This has been noted even further as Hou Yifan continues to struggle. Mark Crowther of TWIC opines on Twitter that the woman’s world champion is simply playing too much.