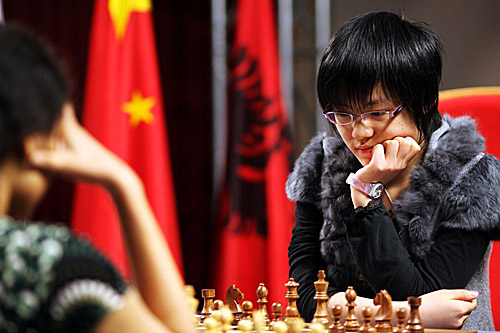 Hou Yifan broke on top in a tense game which ended with Koneru Humpy’s position collapsed under pressure. Photo by Anastasiya Karlovich for FIDE.

China’s Hou Yifan won the first decisive game of the match after struggling to hold in the first two games. In the Queen’s Gambit, Hou played actively and aggressively expanded on the kingside with 9…g5 10. Bg3 Ne4 11. Rc1 Qa5 12. Ne5 Bxc3+ 13. bxc3. Of course there were pinning tricks if black captured the pawn.

Things began to turn for the worse when Humpy began to fall into time pressure. With 17 moves to make in five minutes Humpy began to unravel. Hou kept playing for complications, but Humpy managed to trade queens.

With only a minute left to make 12 moves, black developed a winning position with an ominous passed e-pawn. Humpy was reduced to passivity and the Chinese steamrolled with 34…e2 35. Bc2 Rf7 36. Bxd3 cxd3 37. Rd2 0-1 The backrank killer 37…Rdf6! looms.