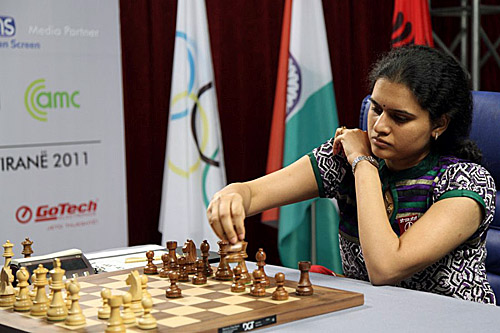 Koneru Humpy trots out the Petroff in Game #2. The Indian pressed by could not score the full point. Photo by Anastasiya Karlovich for FIDE.

Looking at the first two games of the Women’s World Championship, one may say that it is the challenger who looks to be more aggressive. In game two of the match Koneru Humpy trotted out the Petroff against Hou Yifan and was able to equalize. The game changed course when the Indian GM began to expand on the queenside. She pried the queenside open exposed to the castled white king and her pieces started buzzing around the exposed king. While the king had to scamper, the situation was not as perilous as it appeared and a three-fold repetition was reached.