In a recent ChessBase article, Uzbekistan’s Rustam Kasimdzhanov made a pronouncement about the state of professional chess and its appeal to sponsors. In a very stark admission, Kasimdzhanov opened with,

I am writing this open letter, addressed both to FIDE and the entire chess playing world, due to a certain crisis, in which our noble game finds itself lately. This crisis is not only defined by a general dissatisfaction, coming from sponsors, organizers and amateurs; also among the professionals there has been some growing distress. Quite a number of traditional tournaments are no longer organized; in those still out there an ever growing number of extremely strong players is competing for the same money. At the same time voices from all around are expressing serious concern about lackluster play in some top tournaments, and notorious short draws. 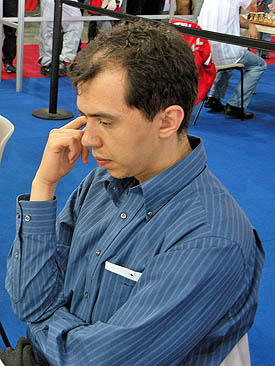 Of course, this topic has long been discussed amongst official, chess professionals and pundits alike. How do we make chess more attractive to not only sponsors, but accessible to the public. There have been a number of essays written including Maurice Ashley’s essay (though not always credited) that ran before many of the tournaments actually put move-limits on draw offers. The Sofia rule has been one of the ways that tournaments have attempted to address this rule with mixed results.

The recent World Candidate’s Match took a lot of the criticism in the open letter and highlighted an oft-heard complaint about “pre-arrangements” and “fightless draws”. With rising players such as Magnus Carlsen, Hikaru Nakamura, Anish Giri and Wesley So, perhaps the best times are ahead for fighting chess. However, the former FIDE World Champion make some valid points.

In his essay he makes some suggestions that will most certainly cause a stir. His proposal is simply to eliminate indecisive results. The two players will play until there is a winner. He uses tennis as an analogy. While there are always problem comparing chess to other sports, what is certain is that sponsors are leaving chess. They are leaving for multiple reasons, but one is due to the lack of appeal for viewership, the primary justification for sponsorship. Here are his thoughts.

I am writing this open letter, addressed both to FIDE and the entire chess playing world, due to a certain crisis, in which our noble game finds itself lately. This crisis is not only defined by a general dissatisfaction, coming from sponsors, organizers and amateurs; also among the professionals there has been some growing distress. Quite a number of traditional tournaments are no longer organized; in those still out there an ever growing number of extremely strong players is competing for the same money. At the same time voices from all around are expressing serious concern about lackluster play in some top tournaments, and notorious short draws.

To understand the reasons why our sport has never made it to the heights it deserves I find it useful to take a look at a sport very similar to ours – tennis. Both games feature the battle of two personalities, showing a whole array of technical weapons in their fight, competing in speed and precision, in patience and wisdom. Why, despite this apparent similarities, despite the fact that many more people worldwide are capable of playing chess properly, do we stand light-years behind tennis in everything that defines success in professional sport?

The reasons are numerous, no doubt, but the main problem, as I see it, is an existence of a draw as a result in chess. Short draws (and I also have made a number of those) make our game look more like an insider academic activity, rather than sport; but they can’t be avoided – the preparation of today and the inherent qualities of chess are such, that a draw, and in fact a short draw, is a most likely result in a game between strong well-prepared players. Still, in a well-organized tournament, top players, getting up to go to their hotel rooms after a ten minute draw, do not add attractiveness to chess.

Returning to tennis, the main attraction is, as I see it, the fact that every single fight produces a result; a winner and a loser at the end of the day. And there is a thrill for every spectator to see, say, Nadal and Federer, come to court, and know with certainty that one of them will triumph and the other one will lose. In short, to put it figuratively, there will be blood. And there will be great champions.

In our game, however, things are different. We also have great champions, but their greatness is sometimes limited to insiders of the game. In order to be successful outside of our little world, in order to make front pages and TV, and thereby also the finance that comes in a parcel, we need champions that appeal to a general public, even to a public far from intricacies of chess. Such was a winning streak of Novak Djokovic this year, for instance. Something that a win in a chess super tournament with 8 out of 13 simply cannot match.

And now comes my proposal. If we want success, sponsors, public and the rest of the parcel, we need to abolish those draws in classical tournaments. And not by Sofia rules – tournaments with Sofia rules produced as many draws as any other; and not by 30 move rule, where players are often just waiting for move 30. We need something entirely different. Like a tie-break in tennis. We need a result. Every single day.

And here is how it works. We play classical chess, say with a time control of four to five hours. Draw? No problem – change the colours, give us 20 minutes each and replay. Draw again? Ten minutes each, change the colours and replay. Until there is a winner of that day. And the winner wins the game and gets one point and the loser gets zero; and the game is rated accordingly, irrelevant of whether it came in a classical game, rapid or blitz.

And much more than that. It will be good for our sport. Not just sponsors and attention and prizes. It will be essentially good for our game. People will try extremely hard with white, in order to decide the issue now, and not in a black rapid game. Instead offering a draw in a slightly better ending in order to save energy and catch a movie, chess players will show their whole ability and will win these endings. As a matter of fact this will develop classical chess.

And there is so much more. Often players, playing white, feeling rough in the morning, get to the game with an attitude “I’ll just make a draw today” Imagine, what will happen to this attitude? Chess will become a true sport. We’ll wake up to win or to lose that day. We’ll come tho the board, ready to play chess. And just like when we come to see Federer play – we see his whipping forehand, his effortless slice, his hammer serve and immaculate return – same will happen in chess. Every single day we’ll see players like Aronian or Grischuk pressing with white, wriggling out of trouble with black and showing some blitz skills to an ever larger public. That is something I would like to watch and play.