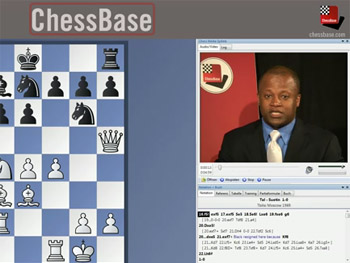 Grandmaster Maurice Ashley has released another instructional DVD titled, “What Grandmasters Don’t See”. It is part of the ChessBase series of videos featuring professional players. Ashley has previously produced, “The Secret to Chess” based on Aikido principles. In this video, the theme switches to chess psychology and “blind spots”. Here is a short preview written at the ChessBase website:

Many times when a top player blunders, it is routinely described by the esoteric term “chess blindness.” In the series What Grandmasters Don‘t See, chess trainer and world-class commentator Maurice Ashley strips away the myth, and for the first time explains why the root of these mistakes is more often based on the psychology of human learning. In Volume 1 of the series, Ashley coins a new term Protected Squares, and shows how many errors occur on squares that seem invulnerable because they are clearly guarded by pawns. In example after example and in his trademark style, Ashley will teach you how to avoid this kind of mistake and how to look for moves that will shock and amaze your opponents.

Order your copy now at the ChessBase Shop!!

Ugandans set for 4.2 Zonal in Sudan