Since going into a self-imposed hiatus from tournament chess, GM Maurice Ashley has not rested on his laurels as arguably one of the games premier commentators. He has authored a couple of books, traveled the world promoting the virtues of chess and has recently released another DVD in partnership with chess software powerhouse, ChessBase. 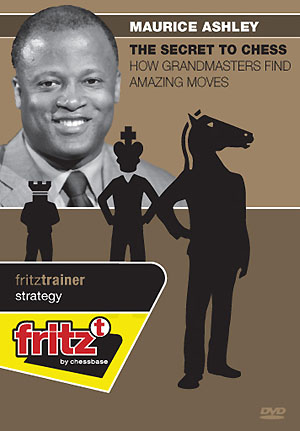 Ashley’s novel approach covered in the video is monikered “drawback chess”. The idea is predicated on finding the drawbacks of the opponent’s move and if necessary, redirecting the energy from forward advances. Ashley makes reference to “prophylaxis” pioneered by Aron Nimzovitsch who sought to prevent the opponent’s plans. However, Ashley’s idea is to encourage the opponent to execute his ideas in order to find flaws, or drawbacks in each of their moves. In his instructive lesson of the Kasparov-Karpov match, he stated,

Don’t block the punch. Make the guy’s punch seem like it’s going to hit. Bring him forward… unbalance him by forcing him to bring his pieces forward.

This is a very different approach to looking at chess because players are taught very early about think ahead and disallow the opponent any chance to execute his plan. However, as in the Japanese martial art aikido, there is no block, but a redirection of the blows and an attack on the newly-exposed points in the position.

The DVD uses a number of instructive games to illustrate the point. These include games of the past and the present with greats such as Alexander Alekhine, Anatoly Karpov, Garry Kasparov and Viswanathan Anand. He also has a segment of chess puzzles as a way to practice these concepts. The set includes a couple of his own games.

The interface is very intuitive with an audio/visual control panel and the ability to stop the game and analyze the variations before continuing the segment. “The Secret of Chess” is another attempt to present the inner-workings of a Grandmaster’s mind. Ashley does it in his usual entertaining and enthusiastic style heard in his TV commentary. It would be a good addition to one’s video library. Below is a sample.

Order your copy now at the ChessBase Shop!!