Whatever happened to Robert Gwaze, the gold medal sensation at the 2002 Olympiad in Bled, Slovenia? Lately he was spotted in Botswana winning the Botswana Open International Chess tournament with an undefeated score. 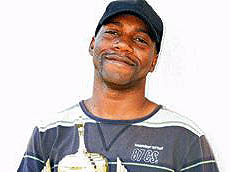 One of Africa’s brightest chess masters, Robert Gwaze of Zimbabwe, won the Botswana Open International Chess tournament undefeated yesterday. Mmegi Online reports on the tournament featuring a cast of local nationals challenging the Zim Master. Only Barileng Gaealasfwe was able to nick him for a half-point. Botswana’s top-ranked player Phemelo Khetho lost to Gwaze, but would finished in second with 6/7.

There were 50 players in a setting that was said to be less than expected for such a tournament. There were also some problems with the prize fund. The tournament attracted 50 players, including 13 with FIDE ratings This included nine Candidate Masters, two Women FIDE Masters, one FIDE Master and one International Master.

As for Gwaze, he has been shuttling around southern Africa and hopes to gets a chance to parlay his skills in strong invitationals. Gwaze scored 9-0 in the 2002 Olympiad to earn the board one gold medal. Since then he has been in England, Singapore and South Africa.