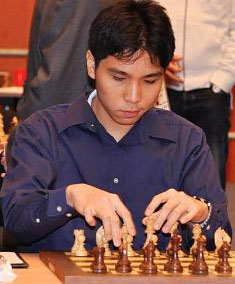 Round #4 will feature a healthy dose of 2700 battles. We can expect shorter draws and perhaps longer matches. A few marquee matches are on tap including Svidler-Shirov, but Ruslan Ponomariov may be lurking in the wings hoping the field has forgotten that he has won this tournament back in 2002. The Azeri duo (Mamedyarov and Gashimov) look very strong. Wesley So (right) is riding a wave of success catapulting him into the international spotlight. He faces a super-solid Russian Vladimir Malakhov who crushed the strong Ukrainian Pavel Eljanov.