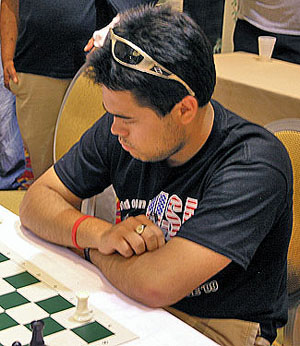 America’s #1 player Hikaru Nakamura is riding a successful year with several strong results including the U.S. Championship title and victories in San Sebastian and Mainz. He flamed out in Melody Amber after falling ill and finishing with a horrible score, but stated that December would be a pivotal moment for him and he looked forward to the challenge facing him at the BNbank Blitz Battle and the London Chess Classic. The biggest challenge of the tournament would no doubt come from hometown favorite Magnus Carlsen, the overwhelming winner of the Tal Memorial blitz tournament.

The tournament had two brackets in which both Nakamura (21) and Carlsen (19) dominated the field. Carlsen waltzed through the preliminaries with 5.5/6 and then beat Jon Ludwig Hammar 2.5/3 and blanked Sweden’s Emmanuel Berg 3-0. Nakamura simply demolished all of his competition winning the preliminaries with 6/6 and beating both Kjetil Lie and Peter Heine Nielsen 3-0. That set the stage for a Carlsen-Nakamura clash (three minutes apiece and two seconds extra per move).

There has been a lot of buzz lately on Carlsen’s 2800 rating and his ascendancy as the “hier apparent” to World Champion, Viswanathan Anand. While blitz cannot is not the sole determinant of strong play, this match captured worldwide interest.

Nakamura told The Chess Drum a week prior to the tournament that he was confident in his chances. Arguably the strongest blitz Internet player vs. the winner of the powerful Tal Memorial the two sat down to begin battle. This time Nakamura prevailed 3-1 in what will prove to become a heated rivalry.