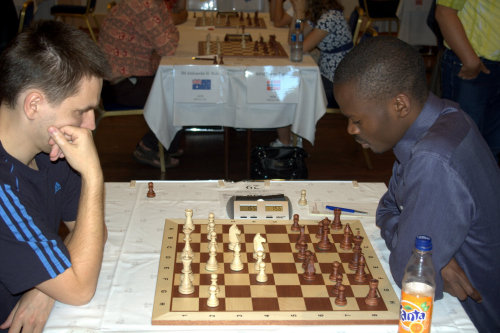 Amon Simutowe is in Norway after competing in the African Championship in Libya. He mustered a +1, but was not among the top six qualifiers for the World Cup. However, things are looking well for the Zambian as he has been getting some badly-needed invitations. As a newly-minted Grandmaster from Africa, he attracts attention to the field and is certain to make an impression.

Unfortunately, Simutowe missed the first round because of a late flight and not only earned a loss, but was then paired with top-seed Bartosz Socko, Grandmaster from Poland. According to the official website, Simutowe gained some good chances in a sharp Sicilian but Socko was able to hold on and draw the game. That has to be a good result considering the disastrous first round. (see game, video)

The venue appears to be very pleasant and GM Susan Polgar and husband FM Paul Truong are also visiting. The is adequate coverage at link below with photos, videos and reports!