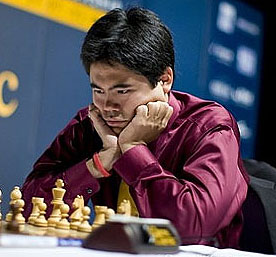 U.S. Champion Hikaru Nakamura is on a rampage in 2009 having won six tournaments in a row including the recent San Sebastian in Spain and yesterday the Chess 960 World Championship in Mainz, Germany.

He won the championship yesterday against the defending champion Levon Aronian of Armenia and the name “Fischer” was tossed around a lot in this tournament… and not only because of the “Fischer Random” variant being played. Nakamura is certainly focused on competing in the World Championship cycle.

Nakamura’s adage “Life is Good” is perhaps contributing to his success along with his rigorous workout regiment that has resulted in him shedding excess weight. He seems to be very relaxed and enjoying the throes of his success. What is even more striking in the last year is that Nakamura seems to be taking a much more mature style of play which when added to his quick calculating powers and fighting style makes him a difficult opponent.

Chess 960 is a variant where the first row of pieces are shuffled and in effect producing what are thought to be middlegame positions before the first move is made. The rules are the same except the king must be between the two rooks and castling is still allowed. On the first day, Aronian had his way winning all three games. It appeared he was poised to win for a third year in a row, but in the second round, Nakamura won all three games (beating Aronian, Sergei Movesesian and Victor Bologan) and would face Aronian in the final.

With his now traditional burgundy shirt, gold tie and black suit on game day, he sat down to take on his 960 nemesis. For those who have never played Chess 960 or “Fischer Random,” it can be a strange experience since piece arrangements are often atypical of positions played in the “normal” starting position. Nakamura was able get the positions he wanted and played quickly. It appeared that Aronian was shaken after the first loss. He then tossed a piece in the second losing in 26 moves and was brutally crushed in the third (21 moves). In the final position, black’s pieces were looking on helplessly from the kingside while the black king was being skewered. Nakamura would be the new World Champ!

Nakamura told The Chess Drum that he has recently vaulted into the top 20 with his recent wins and has a busy schedule including the heavily anticipated Corus tournament in December. He has enlisted the help of an unheralded U.S. Master Kris Littlejohn, who has been a second and friend. Nakamura has broken practically every rule for becoming an elite player and perhaps reignites the debate on how strong players should be produced. The world will soon see how far he can go.