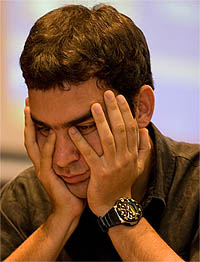 Cuban Grandmaster Lenier Domínguez Pérez (right) won the title with a dominating performance of 11.5/15. While not the favorite in a powerful field, it is not surprising that Dominguez had a good result. Cubans are typically fond of blitz and Dominguez showed his strength by conquering a field including: Vassily Ivanchuk (2787), Alexander Morozevich (2787), Peter Svidler (2727), Alexander Grischuk (2719), Teimour Radjabov (2737) and Shakhriyar Mamedyarov (2731). Gata Kamsky also took part as well as Judit Polgar who came in a disappointing last place on 2.5/15. Egypt’s Bassem Amin (2560) got 4/15.

A record-breaking tournament will occur in Dresden as 154 men’s and 116 women’s teams will participate in the world’s premier team tournament. The Chess Drum will be in Dresden starting on 20th. More details to follow!