The Dresden Olympiad is here and there have been a lot of changes since the last biennial tournament. Armenia took the men’s gold while the Ukraine took the women’s gold in a tournament marked by the rise of the Chinese men (2nd) and the fall of the Russians (6th). This year, these two nations will be vying for gold with Russia bringing a team boasting an average rating over 2750. China touts the rising quartet of 2700-rated players under age 25. This presents a breakthrough for China who along with India are the fastest rising powers in the chess world.

Other federations will be stocked with their best talent and we will see the usual powers from Armenia, Israel, USA, Georgia and Azerbaijan shoot for medals. What is more exciting is the emergence of young stars from France (GM Maxim Vachier-Lagrave), Cuba (GM Lenier Dominguez), the Philippines (GM Wesley So), Vietnam (GM Nguyen Ngoc Truong Son) and Mexico (GM Manuel Leon Hoyos). The landscape of chess is changing. This tournament has broken a record for the number of teams registered (156) and Africa will have 24 teams represented! Here are the top ten Drum Predictions for 2008! 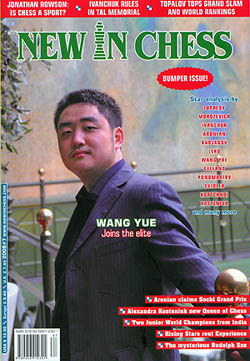 Analysis: The fastest rising chess power in the world. At the 2006 Olympiad, Wang Yue (2736) had not reached 2600, but led the Chinese side with a blistering 10/12 and 2837 performance. Bu Xiangzhi (2714) scored a solid 8/12 with a 2790 performance. China will be even stronger and will replace Zhang Zhong (now Singapore), Zhang Pengxiang and Zhao Jun with rising juniors Wang Hao (2696) and Li Chao (2622). With the momentum China has created, the team cohesion and the improvement of their junior stars, China stands an excellent chance to take the gold.

X-factor: The key here will be experience of the young Chinese players Wang Hao and Li Chao. This will be their first Olympiad and it remains to be seen how they will fare in pressure matches. Wang Yue will hold his own on top board. His flexible style can match-up with other board #1 contenders well. Bu Xiangzhi is actually the elder statesman at 25 and he has been in the international spotlight since age 13. He has a tendency to be inconsistent as does Ni Hua (2710). However, all have shown tremendous form in the World Minds Sports Games. This cohesion and team spirit has been the golden formula for both the Ukraine (2004) and Armenia (2006). 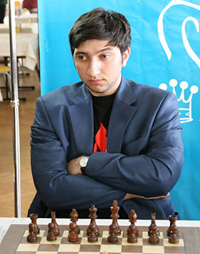 Analysis: This young cadre of players from Azerbaijan have had the potential to bring home the medal the past Olympiad tournaments, but inexperience and the absence of Shakhriyar Mamedyarov in 2006, hurt their chances. With a “dynamic duo” on #1 and #2, Azerbaijan’s Teimour Radjabov and Mamedyarov will be ready. Radjabov appears to be in excellent form and will have a young and talented quartet to follow (Mamedyarov, Vugar Gashimov (right), Gadir Guseinov and Rauf Mamedov)… all under 24.

X-Factor: The main factor here will be Radjabov’s stability on board #1. He has a tendency to take risks in tournament play, but in team play he has proven to be more solid. Azerbaijan can put Mamedyarov on board #1 without a loss in strength in case Radjabov needs rest. Mamedyarov also has a provocative style which can squeeze crucial 1/2-points when needed. The surprise could be Gashimov who has breached 2700, won Cappelle LaGrande and tied for FIDE Grand Prix tournament this year and is on the rise. He is the player to watch. Like China, they are young with very good team chemistry. 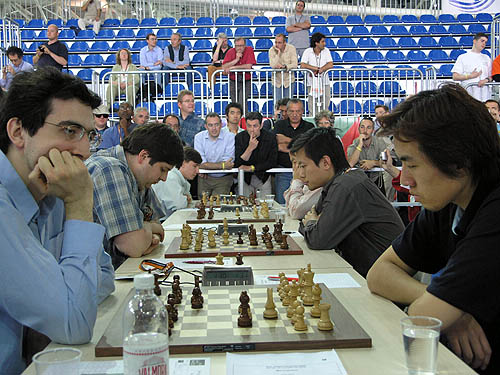 Analysis: By all accounts, most will pick Russia merely because they boast an average rating of over 2750. However, they have had powerful teams in the past two Olympiads and have not struck gold. This year will be no different. While Kramnik will certainly provide a strong showing on board #1, five-time Russian Champion Svidler has to be more consistent. Morozevich will perhaps be asked to push for points, but he has a tendency to suffer lapses with his pragmatic style. Russia will have a better alternate in Dmitry Jakavenko who will hopefully replace Sergei Rublevsky’s -1 performance in 2006.

X-factor: Which Svidler will show up? Will it be the world championship contender or the player who crashed in Aerosvit and the FIDE Grand Prix? Alexander Grischuk is playing a lot of poker these days and there remains a question of his focus. We will see. Look for Kramnik to play well and to prove something after his loss to Viswanathan Anand. However, a team of stars does not equal a strong team. We will see who Russia places on boards #2 and #3 and how often they go to Jakovenko.

4. Ukraine – This team is practically the same from the previous years, but young talents Sergei Karjakin, Andrei Volokitin and Alexander Moiseenko have stagnated. Vassily Ivanchuk often plays so many tournaments one wonders if he will have enough energy to play at a high level. He has recently played in the World Blitz Championship and the Cap D’Agde losing in the finals to Lenier Dominguez and Hikaru Nakamura, respectively.

5. Bulgaria – This team looks solid. With former FIDE champ on board #1 and with a Ivan Cheparinov on #2, Bulgaria will not stand a chance of losing on both boards in the same match. The Bulgarians have a reputation of being well-prepared and have unfurled a number of novelties in crucial games. This provides somewhat of a psychological advantage and may affect the board match-ups since some teams may not want to run into prepared lines. This is perhaps the strongest team Bulgaria has had in recent Olympiads.

6. Armenia – The defending Olympic champions will miss Karen Asrian’s stability. Asrian died tragically this year and will be replaced by the World Champion namesake, Tigran Petrosian. The lineup is still very powerful, but they lack power on the lower boards. Gabriel Sargissian scored a stunning 10/13 at the 2006 Olympiad playing every match. He may go the distance this time as well. Levon Aronian and Vladimir Akopian are a solid duo, but the latter has been quiet in recent years.

7. USA – USA was the surprise bronze medallists in 2006, and it would not be out of the question if they scored a medal in this tournament. Hikaru Nakamura has been on fire and is playing with a more universal style. Gata Kamsky is itching for a fight since his match with Veselin Topalov has been delayed. The downsides… Alexander Onischuk has been playing in Europe without spectacular results. He remains a very solid team player. US Champion Yury Shulman will be making his debut. Varuzhan Akobian is a good team player to have in reserve, but he has struggled lately. Nakamura could win a board medal and can squeeze 1/2-points if the team needs them.

8. Israel – A perennial power with a mixture of veterans and youth. Boris Gelfand will most likely be playing one board #1 with his solid style, but he has tailed off lately. Teenage sensation Maxim Rodshtein will be a new face. It seems like yesterday that Boris Avrukh and Emil Sutovsky were rising juniors, but are both at least 30. They will have to show that they have something left if Israel is going to get into medal contention.

9. India – This is a surprise since World Champion Viswanathan Anand is not playing. However, India is riding on tremendous national pride and have a cadre of young players who will be able to compete. The team is rather young and got a bit younger with G.N. Gopal as an alternative. Nevertheless, the chemistry is exceptional and look for India to make a surprising showing despite the absence of their national hero. India came in 8th in 2004, but a disappointing 30th in 2006. This tournament will show how much the Indians have matured.

10. France – With rising star Maxim Vachier-Lagrave on #2, France may make some waves. Etienne Bacrot proves he can still play at the elite level and has a good supportive cast with Vachier-Lagrave and Laurent Fressinet. They also have blitz specialist Vladislav Tkachiev and young star Sebastien Maze.