The 2007 chess year was another good one for chess in Jamaica. The year started with the surprise victory by junior player Mikhail Solomon in the New Years Open in January. This was however not a sign of things to come, as Solomon failed to build on this success either at the junior or senior level. On the junior chess scene, the symbol of schools chess supremacy the RBTT National Schools Chess Championship, was won by Glenmuir High School in February. Glenmuir’s top player Onaje La Mont went on to register a mild upset over the 2006 National Junior Champion Brandon Wilson to take the 2007 National Junior chess title in March.

Wilson however rebounded convincingly from this disappointment to take two regional junior titles in both Trinidad and Tobago and Barbados in August. In securing these titles, Wilson twice dispatched the best juniors from the English-speaking Caribbean to cement his place as the English-speaking Caribbean’s top junior player. On the local scene, Wilson was also one of the top players at the senior level. He placed first in the Robert Wheeler Open in April and the Clarendon Open in November, second in the New Years Open in January and third in the Harold Chan Open in September and the Jamaica Open in October. 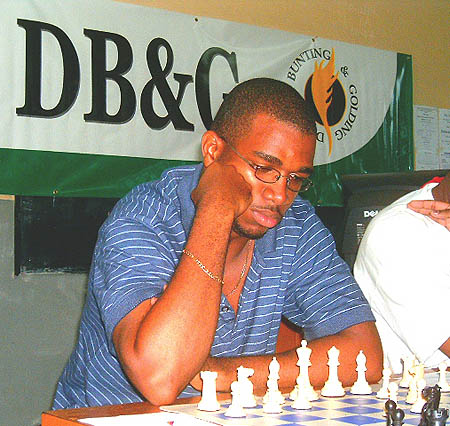 For his achievements in 2007, particularly his regional triumphs, Wilson received the Prime Ministers Youth Award for Excellence in Sports in December. He was also awarded the title of National Master by the Jamaica Chess Federation.

Only one chess player, National Master Jomo Pitterson, can claim to have outperformed Wilson in 2007. Pitterson focused his attention on playing overseas and a few select local tournaments.

In May, Pitterson made a tentative start to his overseas exploits with an eighth place finish at the Digicel RBTT Heroes Day Masters Cup in Barbados. In June, he convincingly defeated seven-time Jamaica National Champion National Master Shane Matthews to win the Masters KO Championship in Jamaica. In July he again ventured overseas to participate in the Curacao Chess Festival, where he performed creditably, suffering only two losses to Grandmasters. In August he travelled to Trinidad and Tobago where he entered the CMMB Caribbean Open and again improved on his previous performance, sharing the fourth place prize after ending unbeaten, with two draws against International Masters Amon Simutowe of Zambia and Humberto Pecorelli-Garcia of Cuba, both of whom tied for first place. 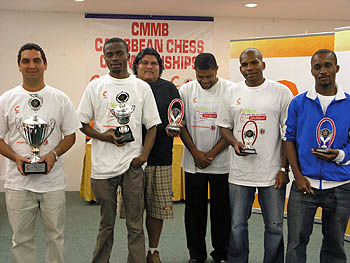 Pitterson saved the best for last, when in December he journeyed to the Jamaica Conference in Kingston to enter the biggest tournament in the history of Jamaican chess, the JMMB/Burger King Frederick Cameron Open, which had over 200 entrants including Grandmaster Maurice Ashley. Pitterson won the tournament with 5.5/6 and in the process became the second Jamaican to defeat a Grandmaster when he defeated Ashley in the last round. 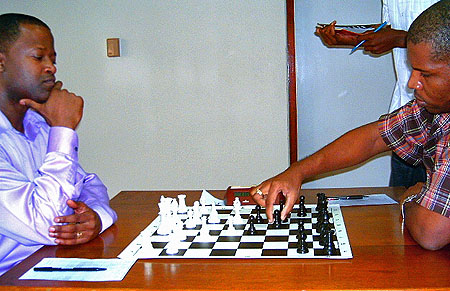 Jomo Pitterson on the move against GM Maurice Ashley.
Photo by Peter Myers.

FM Warren Elliott also had good year after winning the Jamaica National Championship and the National Blitz Title in September. Apart from Wilson, Pitterson and Elliott no other player was able to win more than one title during 2007.

Complete open tournament victories for the year include: 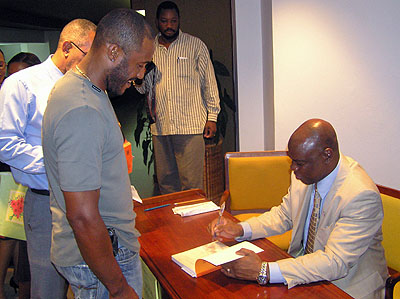 Attorney Ian Wilkinson signs a copy of his new book, “Excitement Galore: Chess in all its Glory”, for former Jamaican international footballer, Wolde Harris. Both Mr. Harris and Ian Wilkinson are Alumni of Kingston College (KC). Photo by Bertram Scott.

* This was WFM Deborah Richards’ sixth straight Jamaica National Women’s Champion Title, the last three of which were won with perfect scores of 6/6. Richards’ last loss or draw in the Women’s Championship was a loss to Iyatiti Mokube in September 2004! This record is both a sign of her complete dominance of Women’s Chess in Jamaica and an indication of the magnitude of the work to be done to develop Women’s Chess in Jamaica.