Varuzhan Akobian and Alexander Stripunsky battling it out in the blitz tiebreak. Akobian won the game and was declared the overall champion. Photos by Daaim Shabazz.

In a repeat of last year, nine players tie for first place at the World Open. Grandmasters Hikaru Nakamura, Sandipan Chanda, Leonid Yudasin, Evgeny Najer, Alexander Shabalov, Alexander Stripunsky, Victor Mikhalevski, Varuzhan Akobian and Julio Becerra all ended on 6½-2½. Akobian and Stripunsky had the highest tiebreak scores and faced each other in an one-game “Armageddon” tiebreak. An exciting opposite-colored bishop ending ensued with a relatively balanced position. The game ended with a clean tactic for Akobian and thus he became the 2007 World Open champion and took home US$5468.12. The other eight winners took home US$5102.12.

The consensus has been that this has been one of the competitive World Open giving the number of GMs and the fact that the popular under-2400 section ensured that the top field was not “diluted.” Top Grandmasters were playing each other as early as rounds 1-2. The winning score was 6½-2½, a half-point down from a year ago when nine players also tied for 1st. While there were no contingents from India or China, the field had enough foreign players to make it “spicy.” Mark Paragua did not have a good tournament, but said in an interview with The Chess Drum that “it was not his time.”

Despite the exciting games and spirited play, popular columnist GM Andy Soltis has written an article in the New York Post criticizing the players on the top boards for agreeing to quick draws in the last round. This argument has been made increasingly over the years and has inspired a plethora of “no draw” rules. 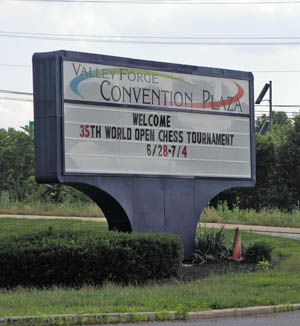 Welcome signage for the 2007 World Open. There were 1063 participants from around the U.S. and the world.

However, in this tournament, it was exceedingly tough given the fact that GMs were facing tough competition early on and perhaps had to play tough GMs twice in one day! Grueling!! Soltis, who hasn’t played top level chess in 15-20 years, failed to mention these points in his article. To say that these GMs did not come to play chess would make clear that Soltis did not follow the tournament. Read his article here.

William Morrison tied for 1st in the under-2400 section on 7-2. I conducted an interview with him and will post it in the next couple of days. He stated that he prepared for the tournament and hopes to get back on the tournament trail to get his 3rd and final IM norm. Nakamura won the blitz competition splitting exciting two games with Vadim Milov and beating FIDE Master Kazim Gulamali 2-0. Gulamali, considered the world’s best bughouse player, beat Darmen Sadvakasov both games to put him in a showdown with Nakamura. Yaacov Norowitz came in 2nd by winning his match with Milov.

There were mixed reviews about the tournament site and the numbers were down from last year. The official count was 1063 players (including re-136 entries). The site was plagued by an inefficient shuttle system and the lack of food choices in the immediate area. The other complaint was the cost of the entry fees which was seen as exorbitant. Next year and the year after, the tournament returns to downtown Philadelphia. Let us hope that Bill Goichberg finds the right formula for America’s premier tournament.