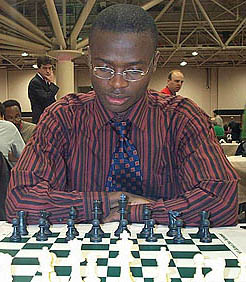 Amon Simutowe is currently playing in the New Jersey Grandmaster Futurity International which runs from July 7-11 at the Sheraton Parsippany Hotel. The Zambian International Master will battle against nine other hopefuls including four Grandmasters. He has good chances for the 3rd norm.