With COVID-19 bearing down on the world, Jamaica got in the last of their tournament activity before the Executive Council of the Jamaican Chess Federation (JCF) suspended activity on March 13th. That included the St. Catherine Open, a FIDE-rated event scheduled for March 19th-22nd.

In light of the coronavirus (COVID19) threat being experienced across Jamaica and the world, the National Executive Council of the Jamaica Chess Federation (JCF) has decided to suspend all chess activities for the next two (2) weeks in the first instance. This is in keeping with the Government of Jamaica’s recent recommendations against all major gatherings as more cases are confirmed locally.

However, the JCF was able to hold its National Age Group Championships. The federation’s Public Relations Chairperson David Rose gave the following account…

The most important chess championships for youth concluded over the weekend (March 8) at the UTECH Auditorium! The National Age Group Chess Championships 2020 selects the youth champions of Jamaica, who will later on represent the country at International events. The tournament saw young talents across the island crossing their “mind” swords against the best in the country. Over 400 children from more than 50 schools participated. 12 new champions were crowned in sections from Under 8 to Under 18. 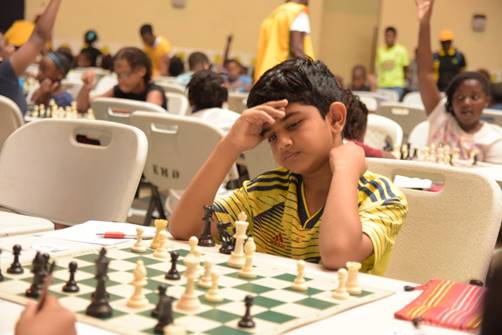 Under 10 Champion Ronak Shergill of Porter Center for Knowledge,
ponders his next move. 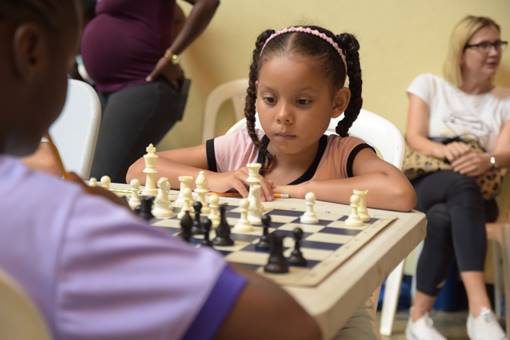 Under 10 Female Champion Victoria Salazar from Hillel Academy
is in a pensive mood.

In the end, the Under 8 winners were, Victoria Powell and Khaleel Johnson Bartlette with a perfect 6/6 points. Victoria Salazar and Ronak Shergill walked away with the Under 10 titles. Kaia Gayle got 5.5/6 points to capture the Under 12 female title, while Jaheim Smart had to win a tiebreak playoff vs Corbin Harvey to claim the Under 12 boys section, after both were tied on 5.5 points. 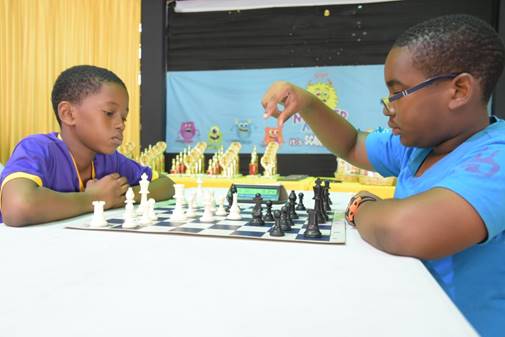 The competitive Under 14 section saw Amy Stephenson and Daren Mckennis both continuing their fine run of form, winning with 5.5 points. Under 16 champions were Raehanna Brown and Antonic Chung with an untouched 6/6 points. Tajae Morgan seized the Under 18 title with 5.5 points. The Under 18 female girls section went to a playoffs between Adani Clarke and Ashanti Blackwood after both finished on 4 points. Adani Clarke emerged victorious after the tiebreak speed chess playoff. 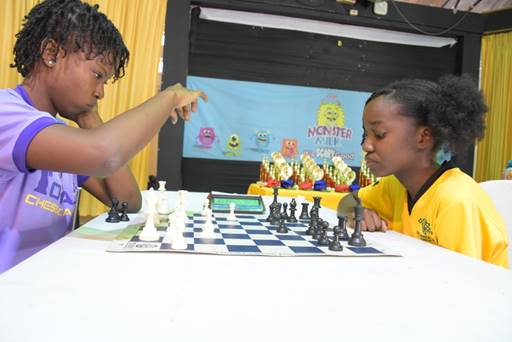 Ashanti Blackwood (left) from Charlemont High, about to make a move
against Under 18 Female Champion Adani Clarke from St. Jago High School.

FIDE Master Warren Elliott, one of the chief organizers for the National Chess Federation event, said: “Chess in Jamaica is growing at a rapid pace! It was a joy to see so many competitors from across the island.” Players travelled from as far as Montego Bay to play for the one weekend championships.

The National Age Group Chess Championships is a Jamaica Chess Federation event and is sponsored by Serge Island Monster Milk. Players who win are eligible to represent Jamaica internationally for 2020.