Africa is starting off the year with hopes of capitalizing off of the momentum generated from last year’s progress. Last year an elite contingent of chess Grandmasters visited Africa as part of the historic Grand Chess Tour in Abidjan, Cote d’Ivoire. This is part of an increasing trend to integrate the continent as an important part of the chess community. Over the years, Africa has attracted chess celebrities including Judit Polgar, Viswanathan Anand, Nigel Short, Hikaru Nakamura, Wesley So, and now Armenia’s Levon Aronian.

Aronian was in South Africa to help launch the 2020 South African Junior Championships. His 107-board simultaneous exhibition was a hot ticket indeed. The affable and fashion-forward GM strolled the boards while donning the “Madiba smart” shirt, a style popularized to the world by Nelson Mandela.

Playing a simul of that size takes a lot of energy and focus but the Armenian begin to cut down the opposition one after the other. The difference was that Aronian had no rating limits and the players were randomized so he didn’t know where there strongest players were. There were a number of draws (due to participants having to play in the Jr. tournament), but there was one fortunate soul who claimed victory against the famed GM. 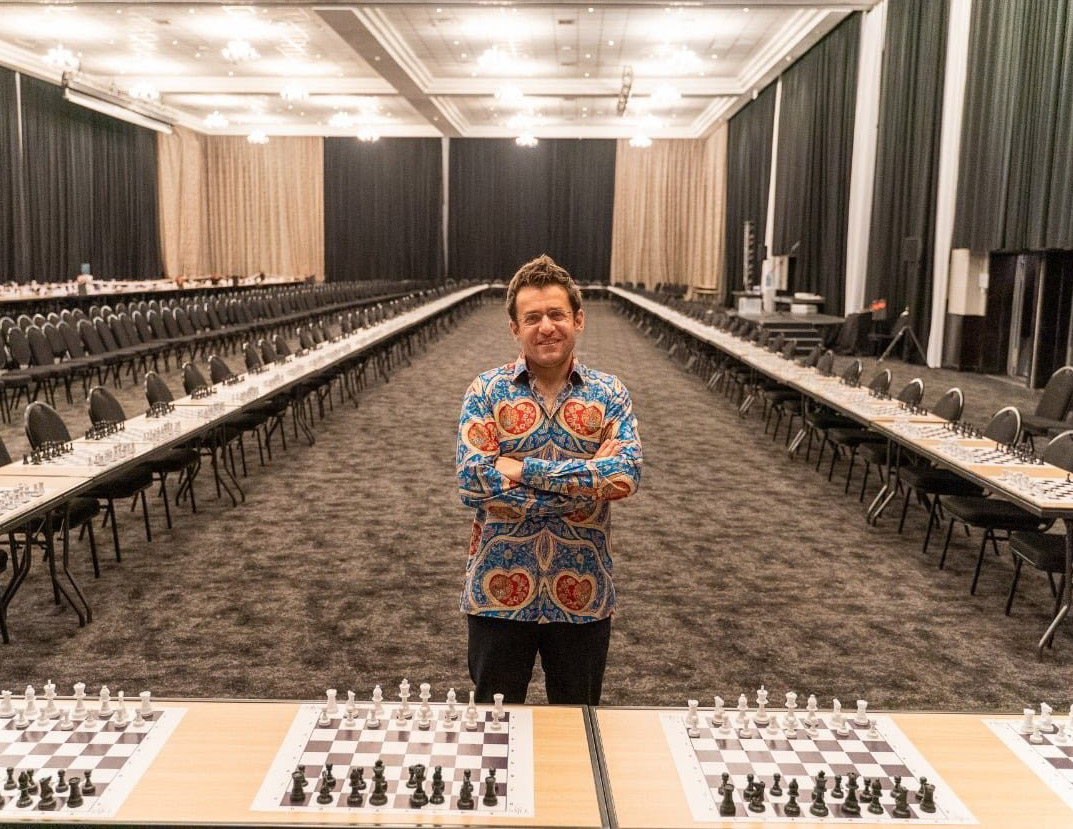 Cornelius Klaver trotted out the Center Counter and the game saw a lot of tension with both sides building up attacks on opposite wings. The game entered tremendous complications after Aronian sacrificed a bishop on e6. Klaver ignored the piece and continued mobilizing his pieces.

Aronian lost control of the thread and the South African player crashed through with a blistering attack! This would be the only blemish in Aronian’s exhibition and he would end on 78 wins, 28 draws and the sole loss to Klaver. Africa Chess Media has the game here!

.@LevAronian was a special guest at the 2020 South African Junior Chess Championship where he gave a simul against 107 players, winning 78, drawing 28 and losing 1. He and his wife @caoili also dressed up for the bughouse side event! Photos by @dinodrop pic.twitter.com/RR3o2X45wr

What visit would be complete if a Grandmaster doesn’t play at the popular watering hole where chess hustlers are lurking? These players are a different breed and are generally make up in speed what they lack in skill. This place is Joubert Park where the action happens. Hikaru Nakamura paid a visit to the park in 2018 in a famous video on chess.com. Wesley So held court last year. Aronian would be the latest GM to face the “lion’s den,” but seemed to be in his element. Africa Chess Media posted a video of the encounter with Simphiwe Buthelezi at 3:1 odds.

The video is endearing for so many reasons besides the cool hat Aronian is wearing. The music and the excitement shows the allure of street chess. It would be the only game Aronian would lose at Joubert, but what a moment! Africa Chess Media’s Tendai Mubayiwa summed up the moment…

It was the only game I saw the GM make a blunder and appear a bit flustered the whole time in the park. Everyone else had tried and failed in Joubert Park and all hope seemed lost. But the great Simphiwe Buthelezi, (@SIMZA19 Lichess handle) saved the day! What a huge relief it was for everyone. Grandmaster Levon Aronian had mowed down the opposition and not even come close to losing in other games. Yes this unassuming young man, Simphiwe Buthelezi, Simza had done what few thought was still possible on Sunday, beating Super Chess Grandmaster Levon Aronian in Joubert Park.

Aronian has always been interested in the expansion of chess in Africa and has been a supporter of The Chess Drum over the years (interviews 2006, 2008, 2012, 2017). It is hopeful that the stream of elite players will continue to visit Africa and encourage others to actually play in Africa in order to qualify for norms. There was a very candid interview conducted where Aronian talks about many topics including the future of chess in Africa. Very insightful!

Posted in Africa, South Africa, The Chess Drum | No Comments