Accra, Ghana has just gotten a bit hotter from the excitement of the penultimate round. The Open Section is undecided as the frontrunner Fy Rakotomaharo (2428) was beaten by Algerian FIDE Master Massinas Djabri (2134) in perhaps the biggest upset of the tournament. With the loss, Rakotomharo fell into 2nd place after leading the tournament since the beginning.

GM Adham Fawzy (2478), who lost to Adham Kandil (2309) in round 6, soared back into joint first with an unlikely partner in Nigeria’s Issac Okeke (2007). Both won their games over Abdallah Alfaitori (1919) and Filipe Marco (2121) respectively. The Egyptian Grandmaster will have the “easiest” pairing in the finale and has the tiebreak advantage having beaten Okeke. The Nigerian will face the giant-killer in Djabri. He has already scored a solid tournament (+5) and a win would secure him a medal. As far as Rakotomharo, he will be facing Jonathan “Joeboy” Oyelabi of Nigeria. 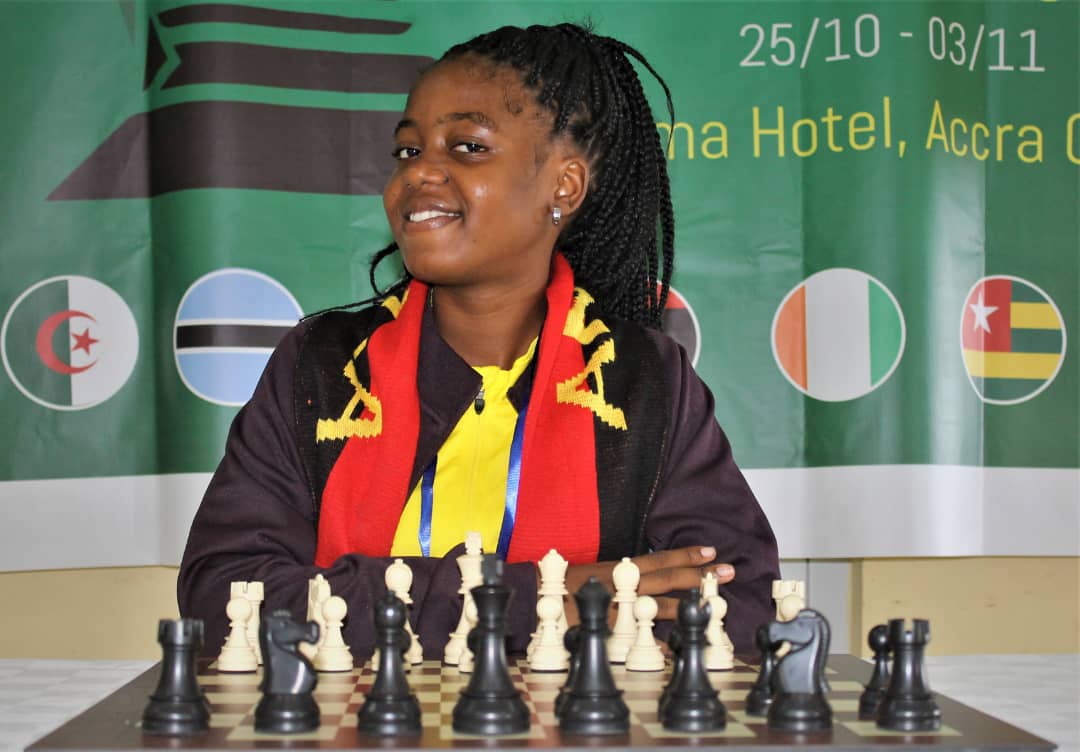 Angola’s Luzia Pires on the verge of taking the crown back to Luanda.
Photo by Babatunde Ogunsiku

The girls’ competition will also go down to the wire as top-seed and frontrunner Luzia Pires of Angolan has been holding down board 1 since the first round. As is common in such small tournaments, the later rounds are usually mismatches between players of different point categories. Pires, on 7/8 will be playing Ivorian Yowel Lorng who has 2.5 points.

Pires has played all of the other contenders and has only given up draws to Algeria’s Chahrazed Djerroud and Togo’s Ivana DeSouza. The surprise of the tournament may the Djerroud who has only lost one game! She will face Ghana’s Maud Benson who has also had a strong showing. 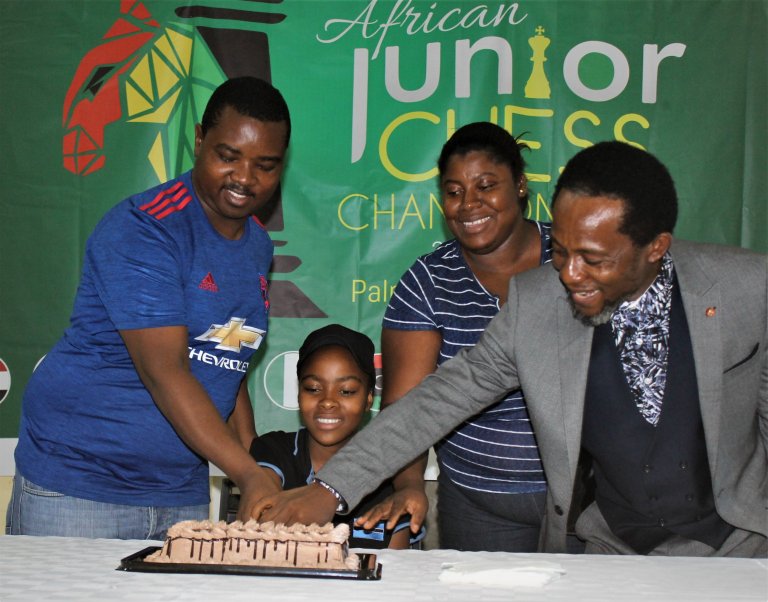 Luzia needs a draw to get the gold medal. Even if Djerroud wins, the Angolan will get the gold on tiebreaks. Botswana’s Refilwe Gabatshwarwe, who just celebrated her 14th birthday, still has a chance to vie for the silver medal.

Emmanuella Trust Enomah of Nigeria has had a decent tournament losing only to Pires and Djerroud. She currently holds the 4th position and needs to win her last game to have a chance at a medal. Djerroud holds the head-to-head tiebreak over Enomah, but if Gabatshwarwe suffers an upset loss then the winner of the bronze medal would most likely be decided by a few tiebreak points.

It has been a good tournament for the young stars. There were no Egyptian girls playing in this tournament so it leaves room for new faces to emerge. The tournament has been an initiation party for West African players. Togo’s Ivana De Souza (4.5/8), Ghana’s Maud Benson (4.5/8), and Ivory Coast’s Tchetche Marie Yavo (4/8) had creditable results.

It will be an exciting finish tomorrow will medals hanging in the balance!