One of the marquee tournaments kicked off today in Wijk ann Zee with the opening of the 80th Tata Steel Chess Tournament. World Champion Magnus Carlsen is coming off of his 2017 Grand Tour win and the recent Blitz title to play in his 14th Tata tournament. He won in 2016 and will be looking to take the crown from Wesley So who won it last year.

The field will feature a number of players who are poised for the Candidates tournament in March. 2018 participants Fabiano Caruana, Shakhriyar Mamedyarov, Vladimir Kramnik, and Sergey Karjakin will join So in London for a right to challenge Carlsen in the World Championship this year. Veterans Viswanathan Anand and Peter Svidler are going to cause some problems for the young crop of stars in the field. Wei Yi, at 18 years old, is perhaps one of the most highly-touted teens.

Other interesting additions will be Hou Yifan who was former Women’s Champion and has announced she is going to attend Oxford University for graduate studies. Baskaran Adhiban is making a return appearance after being the darling of last year’s event with +2. Debutante Maxim Matlakov has gotten his first invitation at age 26 and is the reigning European Champion. Last by not least is the Challengers winner Gawain Jones got the better tiebreaks over Markus Ragger. Both ended on 9/13. 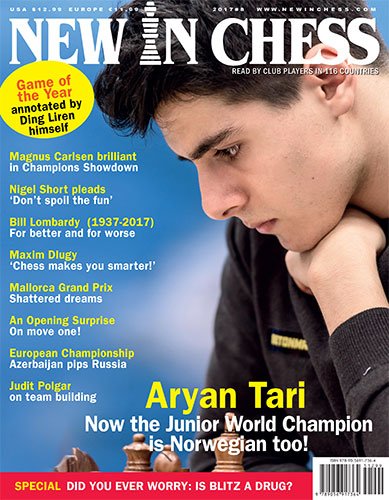 The Challengers tournament will be led by Indian sensation Vidit Santosh Gujrathi touted by Anand as the future of Indian chess. The field includes the last two World Junior Champions in Norway’s Aryan Tari (2017) and Jeffery Xiong (2016). Four-time African champion Bassem Amin of Egypt is making his first appearance at Tata Steel. He recently broke the 2700 barrier becoming the first African player to do so.

Two women will provide lots of excitement as the congenial Harika Dronavali returns to Wijk to compete along with her colleague Olga Giriya who is making her first trip. There are a number of young Dutch talents in the field including the van Foreest brothers Jorden (18) and Lucas (16) and Benjamin Bok (23). Erwin L’Ami will most likely be the pacesetter for the Dutch side to protect home turf. Russia’s 21-year old Dmitri Gordievsky rounds out the field.

Trump invites Norwegians to the U.S. Is Carlsen coming?