Float like a butterfly, sting like a bee…
Ukraine is knocking out top heavyweights…
beating China, Yuriy takes down Yu Yangyi! 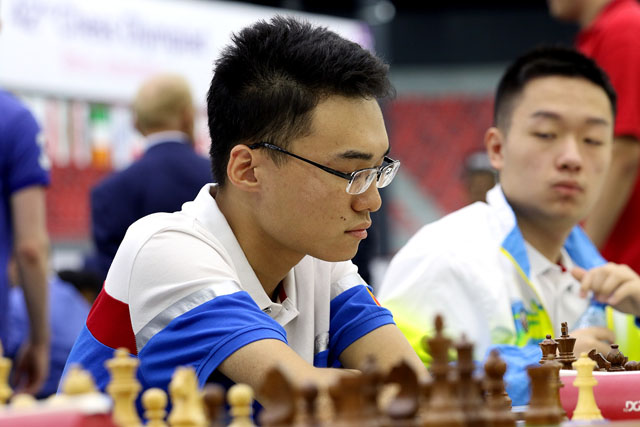 Yu Yangyi suffered China’s first board loss and they tumble to 10th place with only 75 board points. Wei Yi may have sensed danger. Photo by David Llada.

Ukraine defeated tournament leader China with Yuriy Kryvoruchko beating the star of Tromso, Yu Yangyi. The win was a smooth one despite being a 6.f3 Najdorf. There were turbulent waters in the middlegame which the Ukrainian waded through just fine.

Ukraine has started off with a perfect 5/5 score along with the surprising Dutchman and the surging Indians. The Netherlands (where the Ukrainian Ivanchuk is playing draughts) dispatched the Belarus with Benjamin Bok getting an interesting victory against Kirill Stupak. Bok fianchettoed the black queen after white king moved to e2 on move nine! He then sacrificed a whole rook, but with the white king strolling in the middle of the board for a walk, Bok went on the prowl. 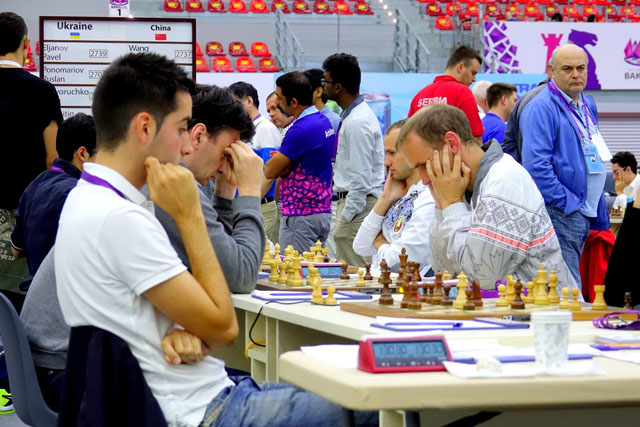 Benjamin Bok looks calm, but the board is burning… definitely ‘Fire on Board’.

The game ended with a series of hard-to-find and aesthetically-pleasing moves including the spectacular 30…d3!! Actually white had to be brave and take the pawn with 31.Kxd3, give back the rook and hide the king. It’s easier said than done. Stupak played passively and the end was swift as the white king was drawn forward into a death march by the slicing black bishop. In the end, white would suffer massive material loss. Get some popcorn for this one!

Speaking of “Fire on Board,” there was an official WTF moment when Alexei Shirov of Latvia played his kindred spirit Richard Rapport of Hungary. Both play hypercreative chess… live by the sword and die by the sword. There was fire and also blood. Yikes. The game from irregular Ruy Lopez with 7.h4 and black playing 11…f5. Both sides try to pry open the kingside. There were some creative patterns in the process. The game is only 22 moves so here it is

In other action, the USA scored 3-1 victory over Serbia and still have not lost a board point. Hikaru Nakamura scored a quick victory over Robert Markus now tying Wesley So for the team leadership with three wins. Nakamura’s win comes right before the rest day.

BTW… here is Ivanchuk playing draughts at the Salou Open in the Netherlands. Wait for it!
Women’s Section

The Ukraine affirmed their place in both the open and women’s competitions with another victory for the politically-ravaged nation. The Muzychuk did their part and beat their overwhelmed opposition. This wasn’t the round for overachievers as Kazakhstan also lost to Russia 3½-½. They had beaten two higher-rated opponents and were tied for first going into the match. This loss showed that they were simply overmatched.

Romania beat Israel 2½-1½, Azerbaijan 1 got the win over Germany 3-1 and India suffered yet another setback being held by the pesky Vietnam team (who have also drawn China). They are pronouncing that China and India are not the only Asians vying for a medal. Nguyen Thi Mai Hung beat Tania Sachdev after earlier beating China’s Zhao Xue. They come with incredible chemistry with something to prove. They have yet to lose a match and face Poland after the rest day.

While Asians are wonderful at many things, they have a lot of candidates for most photogenic with Hou Yifan and Dronavali Harika leading with their 1000-watt smiles. The Vietnamese and Filipinos will be candidates for congeniality and the following picture of Ruja Phitchayarom of Thailand is simply stunning. 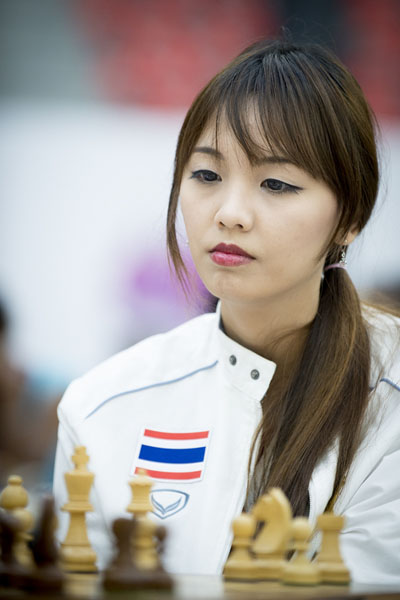 In other news, Phiona Mutesi tweeted about the challenges of Uganda getting to the Olympiad, but also mentioned the forthcoming movie, “The Queen of Katwe,” which is based on her life story. Fantastic! Hopefully, the chess world will get a chance to see this movie of a wonderful story of how chess can have a profound effect on people in the most remote and impoverished parts of the world. The Olympiad is where a lot of these stories can be found.

Planned for 5 rounds at the olympiad but late start caused me play only 2. Sad that am leaving my team, good that it's for movie premiere

Stories of “Queen of Katwe”

Here is her adrenaline-pumping game… a nice parting shot!